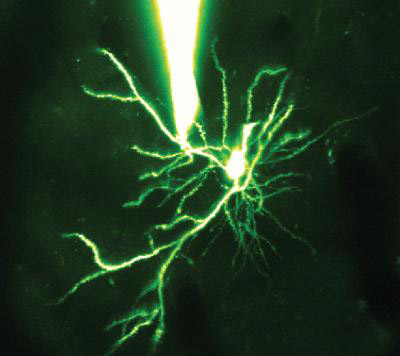 Electrical signals generated by dendrites, the branches of neurons that receive information from neighboring cells, may help neurons tune their responses to stimuli, according to a study published 7 November in Nature1.

Neurons are in some ways like long, charged electrical wires. Signals arrive at a neuron’s dendrites in the form of chemical messengers, sending electrical spikes along the length of the neuron’s body to its junction, or synapse, with another cell.

Dendrites may themselves be electrically active, but this is not thought to play a key function in the neuron’s overall activity2. The new study suggests that the spikes respond to the information they receive.

The researchers placed electrodes in the brains of mice to record signals from dendrites. They then showed the mice a series of moving black or white bars. The dendrites spiked in a regular pattern in response to these bars, and changed their signaling when the bars changed direction.

The results suggest that the dendrites are responding to visual information, the researchers say. They also appear to influence the neuron’s overall response to the information, although exactly how that might happen isn’t yet clear.

Many autism-linked genes code for proteins that function at synapses. A better understanding of how neurons send signals may help researchers unravel what goes awry in autism and similar disorders.