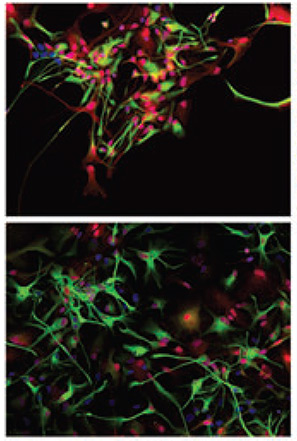 Support cells generated from people with Rett syndrome release molecules that alter the shape and function of neurons, according to a study published 27 February in Human Molecular Genetics1.

These support cells, called astrocytes, are star-shaped brain cells that help stabilize neurons at their junctions, or synapses. Astrocytes provide structural support to neurons, but they also regulate levels of chemical messengers, ions and nutrients in the brain. And studies in the past few years suggest that they play more than just a supporting role in neurological disorders.

In the new study, researchers generated astrocytes from the blood of three women with Rett syndrome. MeCP2 is located on the X chromosome, and one copy is randomly inactivated in cells throughout the women’s bodies. Because of this, only some of the astrocytes have mutant MeCP2; others are normal.

Mouse neurons grown alongside the mutant astrocytes have a smaller cell body, shorter projections and fewer tips that can form synapses than do neurons grown with normal astrocytes. They are also less primed to transmit signals than are controls. Mutant astrocytes also affect neurons generated from a human embryonic stem cell line.

Bathing developing mouse neurons in media taken from an astrocyte culture has the same effect as growing the neurons alongside astrocytes, the study found. This suggests that the astrocytes influence neuronal development by secreting various molecules.

The study also found that mutant neurons grown alongside mutant astrocytes have severe deficits, suggesting that having mutations in both cell types has an additive effect.