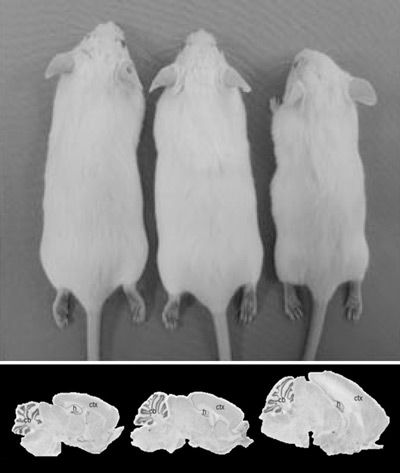 Brain boost: Mice with one (center) or two (right) mutated copies of PTEN are smaller overall than controls (left), but have larger brains.

Male mice that carry a specificmutation in the autism-linked PTEN gene have enlarged brains and show heightened interest in other mice, according to a study published 7 February in Human Molecular Genetics1.

In contrast, mice that lack one copy of the gene show less interest in other mice than controls do2. These differences in social behavior may reflect the diverse symptoms seen in people with autism, the researchers say.

Researchers have created mice that lack one copy of PTEN throughout the brain, or just in certain regions such as the hippocampus. The former have large neurons and big heads and are prone to seizures.

In the new study, researchers engineered mice with a mutation that prevents the PTEN protein from entering the cell’s nucleus, an effect seen in some people with cancer3. The mice also produce about half the normal levels of the protein.

Male mice with the mutation weigh less overall than controls do, the researchers found. Male and female mice both have brains that weigh about twice that of controls. This may be the result of neurons with enlarged cell bodies, and a high number of non-neuronal brain cells.

Behaviorally, the mice are mostly normal, but have trouble balancing on a rotating rod. The male mice are more likely than controls to prefer a mouse placed in their cage to a novel object. Mice that prefer the object are sometimes considered to be mimicking the social deficits seen in people with autism.

The new mutant mice may model the behavior of some people with autism who seek out social interactions but still appear odd to others, the researchers say.