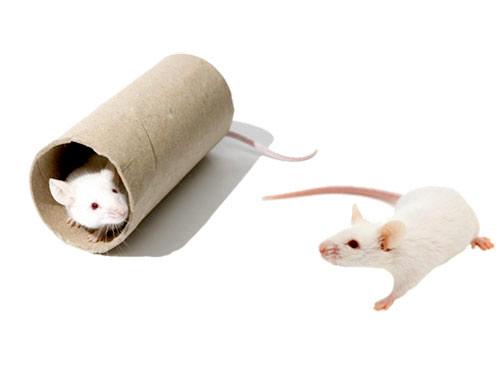 Modest mouse: Male mice with a mutation in SHANK3 take longer than controls to approach females.

Editor’s note: This paper was retracted on 17 January 2013. Associate director of research Alan Packer discusses the implications of the retraction here.

Mice with a mutation in SHANK3, a leading autism candidate gene, show moderate social defects, including less-than-normal interest in other mice. The findings, published 27 May in Cell, suggest that mutations at different sites on the gene can lead to different behaviors1.

SHANK3 organizes the junctions between neurons, or synapses. Several studies have found mutations in SHANK3 in people who have autism. The mutations described so far range from deletions of the entire gene, to subtle changes that substitute individual amino acids.

SHANK3 is also part of the chromosomal region deleted in Phelan-McDermid syndrome, a disorder characterized by cognitive deficits that overlap with autism.

Two independent research teams created mouse models with SHANK3 mutations earlier this year. The first model lacks a region at the start of the gene and expresses only part of the protein. These mice show subtle behavioral defects: Males are hesitant to vocalize and sniff female mice, but they show just as much interest in unfamiliar mice as controls do.

The second mouse mutant lacks a region in the middle of the gene that disrupts nearly all of the protein. These mice show much stronger behavioral defects, including obsessive self-grooming and a lack of interest in other mice.

In this latest study, a third research team deleted a third region at the end of the gene. This removes a binding domain for HOMER, another synaptic protein that has also been implicated in autism. Studies have identified individuals with autism who have deletions in the HOMER-binding region of SHANK32.

Mutating this region in a single copy of SHANK3 targets the non-mutant copy for degradation, reducing the amount of SHANK3 at synapses by more than 90 percent, the study found. The researchers suggest that even subtle mutations in SHANK3 that disrupt HOMER binding could have widespread effects.

The mice show modest behavioral deficits, whose severity falls somewhere between those of the other two models. The mice are less likely than controls to investigate new mice in their cages, responding instead with aggression. Males are also slower to vocalize and approach female mice.

They also have weaker-than-normal signaling in cells taken from the cortex — the brain region responsible for higher cognitive functions, such as language and memory.