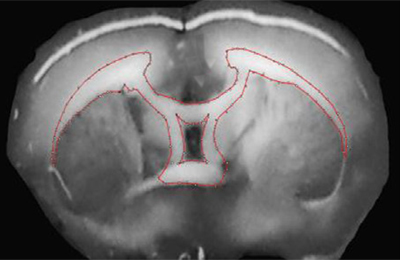 Lost links: BTBR mice, which have autism-like behaviors, may have a unique stretch of nerve fibers that connect the back portions of the brain.

A strain of mice with autism-like behaviors is missing a corpus callosum, a bundle of nerve fibers that connects the two hemispheres of the brain. Two studies published this month investigate the link between these two features.

About 1 in 4,000 people are born with a malformed or absent corpus callosum, a condition called agenesis of the corpus callosum (AgCC). Brains of people with AgCC have difficulty with communication across distant regions, a deficit that researchers posit may also underlie autism. About one third of individuals with AgCC meet the diagnostic criteria for autism.

BTBR mice lack a corpus callosum and have behaviors that show a striking resemblance to those seen in autism. These behaviors include a lack of interest in other mice, unusual vocalizations and obsessive and repetitive behaviors, such as intense self-grooming.

Disrupting the corpus callosum in control mice is not sufficient to lead to these autism-like behaviors, however. A study published 6 April in Brain Research suggests that abnormal wiring, rather than absent wiring, may be responsible for the BTBR mice’s behavior1.

Instead of in the front of the brain, where the corpus callosum would be, BTBR mice have a stretch of tissue connecting the two hemispheres at the back of the brain. Measurements of the electrical activity of neurons show signals traveling across the back of BTBR mouse brains, suggesting that long-range signals may be crossing this bridge of tissue.

In the second new study, published 15 April in PLoS One, researchers sought to pin down the genetic variation that may be responsible for the autism-like symptoms and abnormal brain structure in BTBR mice2. They mated BTBR mice with a typical mouse strain, and then mated these crosses with each other, generating more than 400 offspring.

The researchers then looked for genetic variants in the BTBR mice that are inherited along with their autism-like traits. Six regions of the genome appear to be associated with these traits and one region on chromosome 4 is linked to an abnormal corpus callosum.

The researchers then sequenced these linked regions to home in on the specific genes involved. They found variants that are predicted to alter the corresponding protein in 29 genes. One of these, XIRP1, has previously been linked to autism.

The results are a starting point for understanding the genetics of BTBR mice and linking these genes to autism, the researchers say.