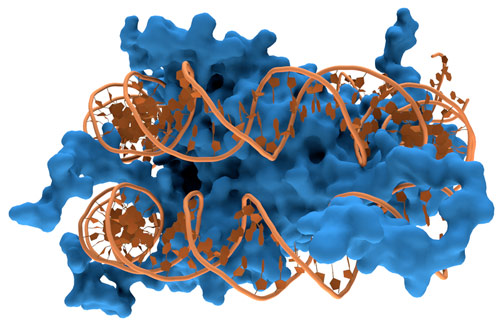 The Rett syndrome gene MeCP2 may subtly regulate the expression of genes across the genome by altering DNA structure, according to a study published 6 October in Neuron. Previous studies had suggested that MeCP2 regulates gene expression by binding specific genes1.

Studies suggest that MeCP2 is a master regulator of gene expression, either activating or repressing the expression of thousands of other genes2. It also plays an important role in synaptic plasticity, the brain’s ability to strengthen or weaken neuronal connections in response to experience.

A study published in August reported that a mutation in MeCP2 that prevents the addition of a phosphate group to the protein increasesthe amount of the protein that binds DNA. This mutation also boosts learning and memory in mice3. The results suggested that phosphorylation of MeCP2 acts as a chemical switch, releasing the MeCP2 protein from DNA, and leading to changes in gene expression.

In the new study, using a technique called ChIP-Sequencing, researchers found that MeCP2 binds evenly across all DNA, rather than only at sites where it would activate or repress gene expression. Interestingly, in contrast to the previous study, MeCP2 with an added phosphate appears to bind at the same levels and at these same places in the genome, suggesting that the addition of the phosphate group does not affect its DNA binding.

The researchers also examined mice with the same mutation in MeCP2 as in the August study. In contrast to results from that study, however, they found that the MeCP2 mutants are less likely than controls to remember another mouse. They also have more complex dendrites, the signal-receiving branches of neurons, and abnormal signaling in neurons that dampen brain activity, compared with controls.

MeCP2 may subtly affect gene expression the same way that histones do, the researchers suggest. DNA wraps around histones, which regulate gene expression by influencing how tightly wound the DNA is.

As is the case with histone modifications, modifying MeCP2 could lead to subtle changes that affect gene expression differently depending on where the protein is bound, the researchers suggest. This could explain why the protein acts as both an activator and a repressor of gene expression.