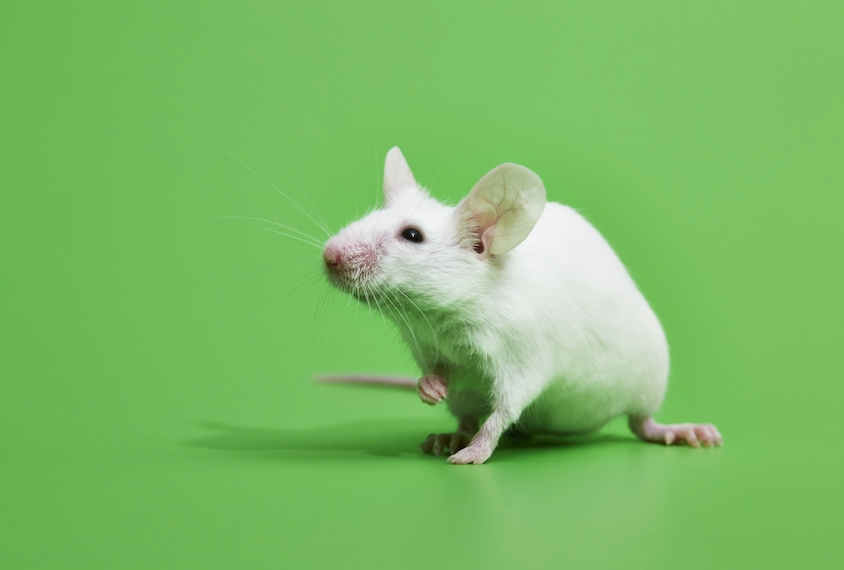 Fear of heights: Mice with extra copies of the Rett syndrome gene are less likely than controls to venture onto elevated corridors in a test used to gauge anxiety.
Photography by Richard Drury

Two genes may be responsible for autism symptoms in mice that have too many copies of the Rett syndrome gene, according to a study published 8 January in Nature Genetics1.

Elevated expression of the corticotropin-releasing hormone (CRH) gene and an opioid receptor gene, OPRM1, are associated with anxiety and social deficits, respectively, in the mice, the study shows.

Rett syndrome, a developmental disorder characterized by intellectual disability, autism and motor deficits, is caused by having too few active copies of MeCP2, which regulates the expression of thousands of other genes.

A 2004 study showed that mice with extra copies of the MeCP2 gene also show some features of autism, including seizures, motor deficits and repetitive movements2. These mice have vision deficits, as a result of their background strain, that make it difficult to assess their anxiety levels and social interest, however.

In the new study, the same team developed mice that express at least two times the typical levels of MeCP2. They were bred from mutant and control mice to minimize deficits caused by inbreeding.

These mice are less likely to enter bright or elevated corridors than control mice are, suggesting that they have heightened anxiety. They also exhibit social deficits: They spend less time investigating other mice than controls do, and prefer to spend time in a chamber with an object rather than in one with another mouse.

The brains of the mutant mice express more than 1,000 genes at different levels compared with controls, the study found. Using the Mouse Genome Informatics database, which aggregates information about existing mouse mutants, the researchers identified 32 of these genes that have been associated with heightened anxiety and social deficits. Of these, nine are expressed at levels that are 50 percent higher or lower than in control mice.

The researchers looked at two of the nine genes to determine the pathways responsible for the autism-related behaviors in these mice: CRH, which codes for a chemical messenger involved in the stress response, and OPRM1, which codes for a signaling receptor located in the brain. Deleting one copy of the CRH gene in mice with elevated MeCP2 alleviates anxiety, but not social deficits, the study found. By contrast, removing one copy of OPRM1 enhances their sociability, but has no effect on anxiety.

Deleting one copy of CRHR1, the CRH receptor, or treating mice with antalarmin, a drug that targets the stress response pathway, also alleviates anxiety in the mutant mice, the study found.

Honing in on the genes and pathways responsible for autism-related symptoms in mice could help identify relevant targets for new treatments, the researchers say.