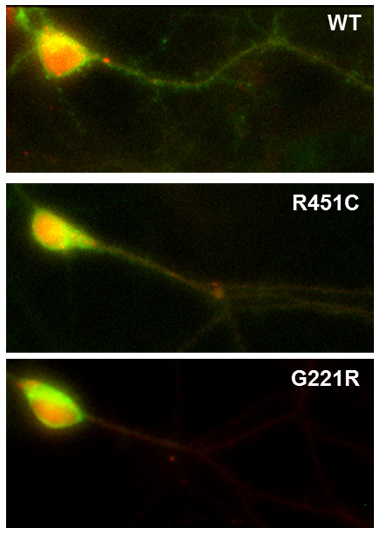 Mutant movement: The neuroligin-3 protein doesn&rsquo;t reach the synapse when it contains a mutation linked to autism (middle) or dwarfism (above).

A point mutation in the autism-linked protein neuroligin-3 (NLGN3), seen in individuals with autism, causes the protein to misfold and localize to the wrong site in the cell, according to a study published in September in the Journal of Biological Chemistry.

Mutations in neuroligins are among the few known single-gene causes of autism. The protein family is important for organizing connections at the synapse, the junction between neurons.

Researchers first identified a role for neuroligins in autism when they discovered point mutations in NLGN3 and NLGN4 in two brothers with autism. Mouse models for mutant forms of both proteins show behaviors similar to those seen in people with autism.

In the new study, researchers looked at the structure and location of NLGN3 with either the original mutation, R451C, or another mutation, G221R. Individuals with the G221R mutation have hypothyroidism and dwarfism.

In rat neurons, NLGN3 with the R451C mutation does not travel as efficiently to the synapse, where it performs its usual function, the researchers found. They also showed that this version of the protein does not fold into its correct structure: it is less compact, takes longer to be fully processed with added sugars, and binds more tightly to chaperones — molecules that help proteins fold properly and reach their correct location.

Interestingly, the G221R mutation has the same effect on NLGN3, but to a higher degree: the protein is more severely misfolded and even less of it makes it to the synapse than with the R451C mutation. The results suggest that subtle variations in the folding of neuroligins can lead to distinct disorders, the researchers say.