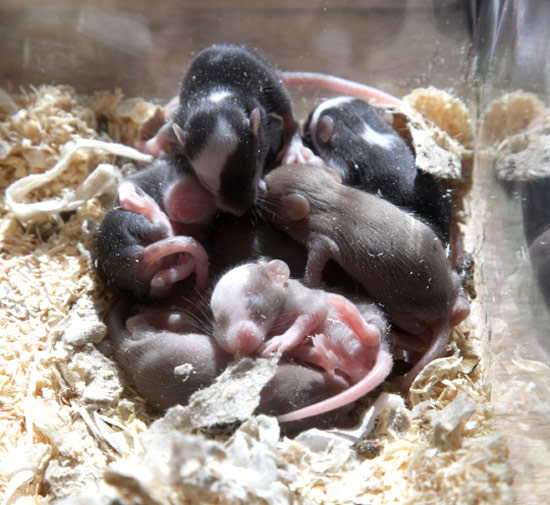 BTBR mice, which are less social than the typical B6 mice, have an elevated immune response in their brains and blood compared with those mice, according to a study published 20 July in PLoS ONE1.

Hybrids of BTBR and B6 mice have intermediate levels of immune molecules.

The study suggests that an overactive immune system is linked to social deficits.

Several studies have shown an association between an immune response in the mother during pregnancy and a higher risk of autism or schizophrenia in her offspring. Other studies suggest that individuals with autism could have aberrant levels of certain immune-related molecules.

In the new study, researchers looked at the immune system of BTBR mice, an inbred strain of mice that mimic many of the symptoms of autism. For example, BTBR mice spend more time interacting with an object in their cage than with another mouse.

Blood and brains from sacrificed BTBR mice have higher levels of immunoglobulin G (IgG) — an antibody involved in immune response — than those of B6 mice. Antibodies in the blood of BTBR mice also react more strongly to mouse brain proteins in culture than do those from B6 mice, indicating that the BTBR mice show signs of autoimmunity.

The brains of BTBR mice also contain more cytokines — immune molecules that transmit signals between cells — than those of the B6 mice.

Crosses between BTBR and B6 mice, which carry half of their DNA from each parent, have intermediate levels of both IgG and cytokines.

These mice also have intermediate social deficits: They prefer the company of a new mouse to that of an object, but less so than the B6 mice.

Hybrid mice with a BTBR mother and B6 father also have a slightly higher immune response than those with B6 mothers and BTBR fathers, supporting the role of maternal infection.