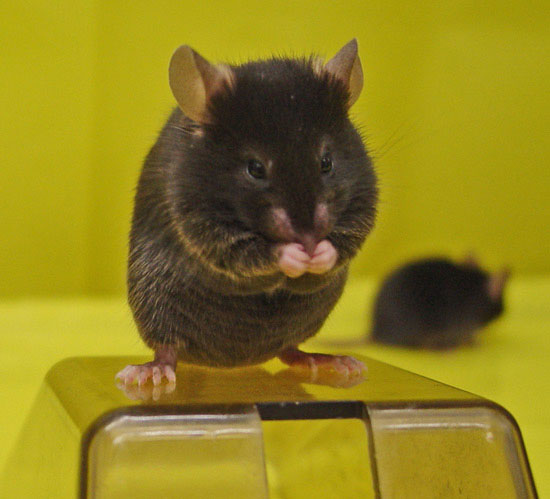 C. Runyan Inside job: Researchers used a powerful microscope to look at the activity of interneurons in live mouse brains.

UBE3A, a protein mutated in Angelman syndrome and autism, regulates communication between neurons in the brain, according to a study published 29 October in Cell.

Excitatory neurons transmit signals in response to external stimuli, such as visual information. They then relay this information by forming junctions, or synapses, with other neurons. The specific time and place at which synapses form is known to be central to cognitive processes.

When two neurons come into contact, proteins at one end of a neuron bind to a receptor on the other, triggering a signal that can activate synapse formation. For example, binding of the ephrinB protein to an EPHB receptor causes an excitatory synapse to form.

An elegant feedback loop regulates this process. A molecule called ephexin5 (E5) can bind to ephrinB and prevent excitatory synapse formation through a signaling pathway. When ephrinB binds to the EPHB receptor, it triggers another signal that leads to the degradation of the E5 protein, allowing synapse formation. UBE3A is a key player in degrading E5.

Mutations that lower the amount of UBE3A are a known cause of Angelman syndrome, a neurological disorder with symptoms similar to those of autism. Mice with a mutation in UBE3A show higher levels of E5 in their brains, and behavioral deficits mimicking Angelman syndrome.

Duplications of the UBE3A gene are also linked to autism. The new study suggests that changes in synapse formation could lead to the cognitive symptoms associated with UBE3A mutations.