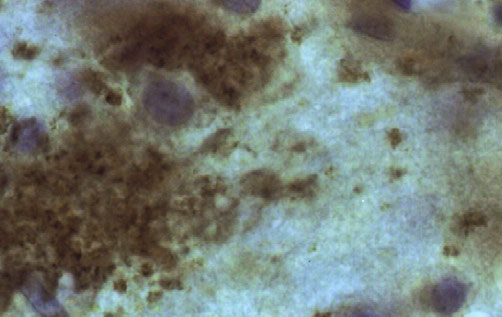 Protein plaques: The brain of a 39-year-old woman who had a duplication of a region on chromosome 15 contains large aggregates (in brown) of a protein related to Alzheimer’s disease.

Amyloid-beta, the small protein that forms plaques in the brains of people with Alzheimer’s disease, is more prevalent in postmortem brains from individuals with autism than in those from controls, according to a study published 2 May in PLoS One1.

The protein is also more common in postmortem brains from individuals who had a duplication of the 15q11.2-q13 genomic region, which leads to a syndrome that includes symptoms of autism. This suggests that it could be associated with the severe seizures and sudden unexplained death that characterize the 15q duplication syndrome.

Amyloid-beta has several functions in healthy cells but accumulates in the brains of individuals with Alzheimer’s disease. Studies have also linked this peptide to autism and related disorders.

For example, one 2008 study found that individuals with autism have more amyloid-beta in their blood than controls do2. Another study, published in January, found more of the peptide in four postmortem brains from individuals with fragile X syndrome than in those from seven controls.

Overall, neurons from the brains of individuals with the duplication have the highest levels of amyloid-beta, followed by those with other forms of autism, and then controls. For example, individuals with the duplication have about eight times more of the peptide in neurons in the amygdala — a brain region that processes emotion — than do controls, and those with other forms of autism have five times more.

The researchers also found amyloid plaques in the brains of two individuals, aged 51 and 52, who had autism, and one individual aged 39 with the 15q duplication. This suggests that the enhanced levels of amyloid-beta in these individuals are a precursor to Alzheimer’s disease, the researchers say.