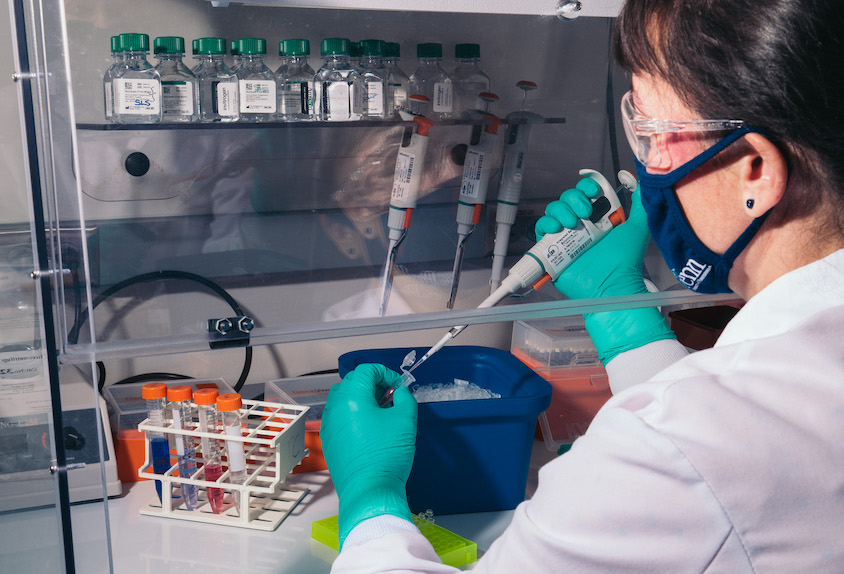 A modified form of CRISPR-Cas9 restores expression of UBE3A — the gene mutated in Angelman syndrome — without cutting DNA, according to a new unpublished study involving mice and human neurons. It points to a gene therapy approach that is potentially safer than conventional CRISPR tools that work by breaking DNA strands, the researchers say.

“Therapeutics for [Angelman syndrome] are on the horizon,” says study investigator Justin Wolter, a postdoctoral fellow at the University of North Carolina at Chapel Hill, who works with both Mark Zylka and Jason Stein.

Wolter presented the findings 14 May at the 2022 International Society for Autism Research annual meeting. (Links to abstracts may work only for registered conference attendees.)

About 1 in 12,000 people have Angelman syndrome, a neurodevelopmental condition marked by intellectual disability, seizures and sleep problems. Those with the condition often can’t walk or live independently; most also have autism.

Children inherit two copies of the UBE3A gene, which encodes a protein that breaks down old or misfolded proteins in the brain. In neurons, a long strand of RNA binds to the paternal copy of the gene, blocking its expression.

For about 70 percent of people with Angelman syndrome, the maternal copy of UBE3A is mutated or missing; thus, no protein gets made.

Gene therapies to treat Angelman often rely on ‘reawakening’ the paternal copy of UBE3A, typically by destroying or blocking the strand of RNA that silences it.

“Even modest levels of unsilencing [UBE3A] can achieve therapeutic effects,” Wolter says. “We may not even need a perfect therapy.”

One approach, pioneered by Wolter, uses the gene-editing tool CRISPR-Cas9 to slice up and disable the gene encoding the silencing RNA. But gene-editing techniques in general can cause unwanted mutations elsewhere in the genome, and for this reason the vast majority have yet to gain approval from the U.S. Food and Drug Administration (FDA).

The new study indicates that a deactivated form of the Cas9 protein — called dCas9, which can still be targeted to genomic regions but does not cut DNA — can restore UBE3A levels without slicing the genome and risking off-target hits.

In cell culture experiments and in living mice, dCas9 unsilenced paternal UBE3A, albeit not as efficiently as the original Cas9, the study shows. Still, new technologies will likely increase the activity of dCas9, Wolter says, and could further increase unsilencing.

There are no treatments for Angelman syndrome, but several gene therapies are in development.

One promising approach relies on strands of RNA called antisense oligonucleotides (ASOs) that bind to complementary gene sequences in cells and block their expression.

But “the lifetime of ASOs are measured in months, and they’re delivered to the cerebrospinal fluid” on a recurring basis, Wolter says. “And there’s some evidence that they are toxic.”

For a 2020 study, Wolter created billions of adeno-associated viruses, or AAVs, and packaged each of them with a Cas9 protein and a guide RNA that directs the protein to the genomic region encoding the UBE3A-silencing RNA. He injected the viruses into a mouse model of Angelman syndrome while the animals were still developing in the uterus.

A single injection knocked out the silencing RNA and restored UBE3A levels to about 40 percent of their normal levels. That boost was enough to “rescue microcephaly and behavioral deficits” common in Angelman mouse models, Wolter says, and the treatment lasted for the lifetime of the animals.

Thus far, the FDA has granted approval to 11 AAV-based gene therapies, according to an editorial published 9 May in Nature Biotechnology. Prior studies on CRISPR-packed AAVs, though, show that they can cause “unintended genome and transcript alterations.”

In his prior work with Cas9, Wolter “spent a lot of time trying to try to look at what the negative consequences of [CRISPR gene editing] might be,” he says. “We looked for evidence of DNA damage, off-target mutations at other sites in the genome, neuroinflammation” and other side effects, but “we didn’t see any evidence of any of these.”

Still, it’s unknown how lifelong insertion of the gene-editing tool “would affect a neuron over the course of decades in a human,” Wolter says.

Preliminary data on dCas9, which is likely a safer option for future gene therapies, suggests that it restores UBE3A levels without cutting the genome at all, and does so over the lifetime of a mouse after a single injection. Wolter says he intends to do behavioral tests on the treated mice to see whether restoring even a marginal amount of UBE3A is enough to reduce Angelman-like symptoms.