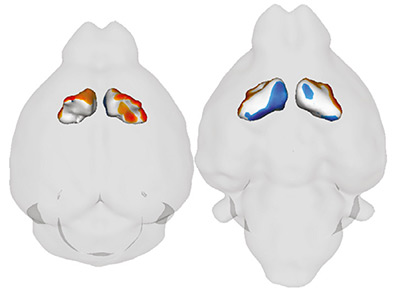 Shape shift: In the brains of mice with a deleted section of chromosome 16 (left and right), the nucleus accumbens — a region involved in reward — is shaped differently and is larger than it is in controls.

Mice lacking 16p11.2, a chromosomal region linked to autism and schizophrenia, have defects in the signaling of dopamine, a chemical messenger involved in movement, reward and emotional control.

The results, published 16 May in Cell Reports, suggest that the deletion disrupts a dopamine circuit in a brain region called the basal ganglia. This same defect may also be responsible for the behavioral problems, including autism, in people with the deletion, the researchers say.

“What these observations resolve for us is that the role of the dopamine circuitry in autism may have been underappreciated in the past,” says Thomas Portmann, a researcher at Circuit Therapeutics in Menlo Park, California. Portmann created and tested the mice as a postdoctoral researcher in Ricardo Dolmetsch’s lab at Stanford University in California.

The 16p11.2 region of chromosome 16, a hotspot for neurological disorders, is known for its complex biology. Deletion of one copy of this region has been linked to autism, and its duplication to schizophrenia. About 20 percent of individuals with the deletion and 10 percent of those with the duplication have the respective disorder. And overall, nearly 1 percent of people with autism have mutations of the 16p11.2 region.

“Given the relative frequency of this deletion in autism spectrum disorder, we predicted [the mice would have] social deficits and repetitive behaviors,” says Jacqueline Crawley, professor of psychiatry and behavioral sciences at the University of California, Davis, who led the behavioral analysis of the mice.

But to her surprise, she says, the mutant mice are just as sociable as controls are. The mice show some repetitive behavior, such as running in circles, but don’t have the bouts of repetitive grooming shown by other autism mouse models with problems in the same part of the basal ganglia.

Mice with the deletion also seem to have trouble recognizing familiar objects, suggesting cognitive difficulties. This suggests that the mice would serve as a better model for intellectual disability than for autism, says Crawley.

The researchers first described the mice at the 2012 Society for Neuroscience annual meeting. They reported at the time that the animals are underweight as pups and those with the most severe symptoms die within a few weeks of birth.

The mice that do survive are thin, deaf and have altered proportions of dopamine neurons in their brains. They also run repeatedly in circles and don’t habituate to new situations. The pups are hyperactive and clumsy, with movement problems causing them to tumble over.

In contrast, people who have the deletion are often overweight, have normal hearing, and show a completely different suite of behavioral and neurological issues, including speech delays and seizures. In addition to autism, they are prone to various behavioral disorders, such as schizophrenia, attention deficit hyperactivity disorder and bipolar disorder.

The mice also differ from people in their reactions to at least one popular autism drug. The antipsychotic drug risperidone does not calm the mice as it does people.

“With all of those things, I have difficulty buying it as a good model,” saysNouchine Hadjikhani, associate professor of radiology at Harvard Medical School, who was not involved in the study. Hadjikhani investigates the neurological bases for social deficits of autism in people.

Another team of researchers, led by Alea Mills at Cold Spring Harbor Laboratory in New York, has created a different mouse model of the same deletion. The characteristics of that set of mice also differ from those of people, but they resemble the new model in some ways.

Mills’ mice also have normal social behavior and perform repetitive actions —although the behavior seems to be more intense — such as repeatedly hanging from the cage ceiling. Like the new mice, they lack fat in their abdomens. “When I saw this paper, I was thrilled. This validates our previous discoveries,” Mills says.

The new study further characterizes mice with the deletion by looking at gene expression and the details of brain development.

“A key strength of the paper is that it goes quite a bit deeper into the neuroanatomical defects,” says Nicholas Katsanis, director of the Center for Human Disease Modeling at Duke University in Durham, North Carolina. Katsanis has made zebrafish with the deletion but was not involved in this study.

As adults, mice with the deletion are about 12 percent shorter than controls but have brains of the same weight, according to the new study. Their total brain volume, however, is 13 percent less.

The brains of these mice also show differences in specific regions, particularly the basal ganglia, which is critical for controlling movement, activity levels and reward-based learning. For example, one of its structures, the striatum — a region that regulates movement and has been linked to compulsive and repetitive behaviors — is larger in the mice than in the controls in one area and smaller in another.

Because dopamine plays an important role in basal ganglia function, the researchers investigated whether individual cell types in this region express dopamine receptor genes differently than those of controls do.

Using a method they developed, the researchers analyzed the expression patterns of 190 genes in more than 2,000 individual brain cells in the mutant mice, rather than averaging gene expression across all the cells in a tissue. They found widespread differences among the cells, including multiple defects in cells of the dopamine system.

For example, the mutant mice have a striatum with increased numbers of dopamine-sensitive cells, but deeper layers of the cortex have fewer cells with dopamine receptors compared with controls.

Connecting the dopamine circuit defects to the deletion may help reveal how cell-level changes underlie the structural and behavioral problems, says Portmann. The dopamine link may also offer an avenue for drug discovery, despite the unusual reaction to risperidone.

The study is well done and clearly shows unique structural and signaling changes in the brains of mice with the deletion, says Srikantan Nagarajan, professor of radiology and biomedical imaging at the University of California, San Francisco.

But the discrepancies between the characteristics of mice with the deletion and people who have autism or the deletion give him pause, he says. Hyperactivity is not always a symptom of children with deletions, and only a small subset have autism, for instance.

Others raise the same concerns and question whether the dopamine connection is a solid enough lead to investigate new drugs for people with the deletion.

“I think one reason why neuroscience and neuropharmacology has been hitting the wall is because we have been relying on all these rodent models that are so far away from humans,” says Hadjikhani. “Is this the way we want to go in the future?”

This article has been modified from the original. The previous version incorrectly stated that risperidone makes the mice with the deletion more hyperactive, and that mice created by Alea Mills are deaf.