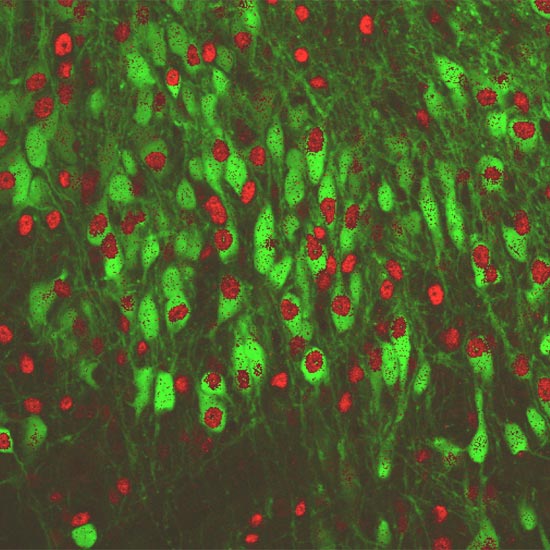 Half mast: In a mouse with one functioning copy of MeCP2, locus ceruleus neurons that express the mutant MeCP2 are smaller and fire action potentials more easily compared with those that express the normal MeCP2 gene (red).

Deleting MeCP2, the gene that’s mutated in Rett syndrome, alters both the size and function of neurons in the mouse brain — at least in one brain region, the locus ceruleus  — according to a 30 September report in the Journal of Neuroscience1.

Sacha Nelson, a biology professor at Brandeis University, and his colleagues looked at the chemical and biological properties of neurons in mice missing one or both copies of MeCP2, which encodes the methyl CpG-binding protein-2.

The team found that neurons in the locus ceruleus are noticeably smaller and more excitable in the absence of MeCP2. The same neurons also appear to be less capable of producing a brain signaling chemical, or neurotransmitter, called norepinephrine, suggesting that MeCP2 loss could affect brain regions receiving chemical messages from the locus.

The findings seem to explain some Rett syndrome symptoms. Experts say they may also have implications for understanding autism, not only because Rett syndrome and autism spectrum disorders share some features, but also because the same brain region was recently proposed to play a role in a subset of autism cases.

Earlier this year, Mark Mehler and his colleague Dominick Purpura of the Albert Einstein College of Medicine published a review linking the locus ceruleus to at least some cases of autism spectrum disorders2. Their idea sprang from the observation that some children’s autism symptoms decrease or disappear when they get high fevers3.

The fever observation led Mehler and Purpura to the locus ceruleus because that region, located in the brain stem, controls both body temperature as well as breathing and stress response. It also produces much of the brain’s norepinephrine, delivering it to forebrain regions such as the hippocampus and regions elsewhere in the brain.

Because the symptoms reappear once the fever passes, the effect also suggests that some cases of autism are caused by changes in the way genes are regulated rather than just changes to the genes themselves, Mehler argues.

The pattern also suggests that brain systems involved in autism might not be permanently damaged, he says, but may be improperly regulated under normal physiological conditions — a theory that Mehler says could both explain how environmental factors such as maternal stress contribute to autism risk and account for the wide variation in autism symptoms and severity.

Mehler praised the paper by Nelson and his team, calling it a first look at the role of locus ceruleus neurons in an autism-related disorder.

Several previous studies have relied only on mouse models missing both copies of MeCP2, but Nelson and his colleagues also used a mouse model that has one normal copy of the gene and is missing the other — a situation that resembles that of girls with Rett syndrome.

They found that locus ceruleus neurons missing MeCP2 are about 22 percent smaller than neurons that have the gene.

Because neurons fire in response to cell membrane disturbance, Nelson explains, smaller neurons, which are surrounded by less membrane, are easier to activate. Indeed, the researchers found that the smaller locus ceruleus neurons are more excitable than their normal-sized counterparts.

For example, locus ceruleus neurons from mice missing both copies of MeCP2 fire about 40 percent more often than do those from mice carrying the gene.

In principle, overly excitable neurons should release more norepinephrine. But the team found another difference in the neurons lacking MeCP2: They contain up to a third less of the enzyme tyrosine hydroxylase, which leads to the production of norepinephrine, suggesting that their norepinephrine levels are lower than that of controls.

Indeed, the team’s subsequent experiments showed that a forebrain region innervated by locus ceruleus, called the cingulate cortex, contains lower levels of norepinephrine in mice missing one or both copies of MeCP2.

The findings are novel and unexpected says Christian Rosenmund, molecular and human genetics professor at Baylor College of Medicine, who was not involved in the study.

In 2007, Rosenmund and his colleagues reported that altering the number of copies of MeCP2 affects how signals spread from one neuron to the next in the mouse hippocampus4. But the size of neurons in the hippocampus does not change when the gene is missing, Rosenmund says, suggesting that MeCP2 loss has different consequences in different cell types.

The results do seem to explain some Rett syndrome symptoms, Rosenmund notes, particularly the breathing problems seen in some girls with the syndrome.

Early studies of Rett syndrome found lower-than-normal levels of norepinephrine — and another neurotransmitter called serotonin — in the brains of individuals with Rett5. Rett mouse models have also previously been shown to have both breathing problems and lower norepinephrine levels in their brains6.

The possible ties to autism are worth following up on, Rosenmund says, but he argues that the results don’t definitively implicate the locus ceruleus or norepinephrine, or noradrenaline, signaling in autism.

“It’s possible that impaired noradrenergic projections could be the origin of the mental problems that autistic kids have,” he says. “But I think it would be far-fetched to say this study explains that.”