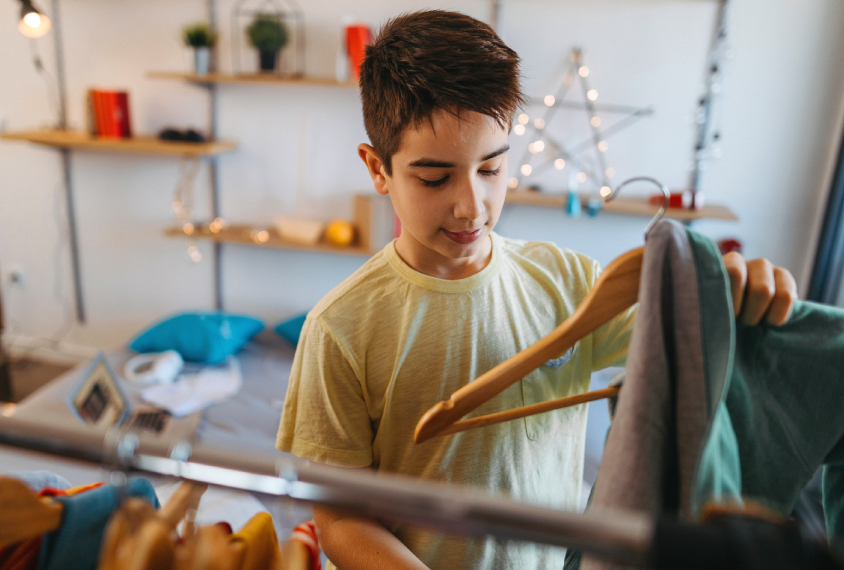 Early learning: Adolescents with fragile X syndrome improve in daily living skills, such as dressing and grooming themselves.

For people with fragile X syndrome, progress in daily living skills and behavior tends to stall later in life, according to a new study1. And weight gain is a common health issue.

The study is the first to track the long-term course of fragile X syndrome, by following people with the condition for nearly a decade.

Most studies of fragile X syndrome have provided a snapshot of a brief period of time or have focused on only children or adolescents.

The new study, led by researchers at the University of Wisconsin-Madison, is among the first to look at how people with the syndrome fare later in life. (The researchers declined to comment.)

“We don’t know a lot about aging in people with fragile X syndrome,” says David Hessl, professor of clinical psychiatry at the University of California, Davis. “It’s an untapped area.”

The findings outline the syndrome’s general trajectory into adulthood, information that could be used to assess therapies, Hessl says.

The researchers tracked 125 people with fragile X syndrome and intellectual disability, aged 12 to 49 years; 30 also have an autism diagnosis.

They interviewed the participants’ mothers and had them fill out questionnaires four times from 2008 to 2017. The mothers rated their children’s level of independence in daily living skills such as housekeeping, dressing, grooming and managing money. They also rated the frequency and severity of their children’s behavior problems, including self-injury and repetitive behaviors, and assessed autism traits using the Social Communication Questionnaire.

Daily living skills improve throughout adolescence and early adulthood, but the improvement slows over time, with skills plateauing in the early 30s and regressing in midlife. Behavior problems follow a similar trend.

Having more autism traits is associated with more severe behavioral problems and less independence in daily living skills, but the traits do not significantly affect the trajectory over time, researchers report. The findings appeared in February in the Journal of Autism and Developmental Disorders.

The trends are consistent with what clinicians see at an individual level, says Elizabeth Berry-Kravis, professor of pediatrics, neurological sciences and biochemistry at Rush University in Chicago, Illinois. “It seems like some of the patients just don’t age well,” she says.

The research raises questions about whether certain therapies might prevent the plateaus or declines in improvement, she says.

To gauge health trajectories, the researchers measured the participants’ body mass index (BMI) — a measure of body fat based on weight and height — and had mothers indicate whether their child had experienced any of 36 medical conditions, including allergies, hypertension and thyroid disease, over the previous 12 months.

The participants had fewer than one health condition on average throughout the study, but the number of health conditions increases slightly with age, the study found. BMI also rises with age: 22 percent of the participants were obese (BMI over 30) at the start of the study, compared with 34 percent at the end. (Obesity rises with age in the general population, too: 21 percent of adolescents and 40 percent of adults in the United States are obese.)

Medications often used to treat behavioral problems in fragile X syndrome are known to cause weight gain2. Limited food preferences, a common trait in people with the syndrome, and lack of exercise may also contribute.

A subtype of fragile X known as Prader-Willi phenotype is further characterized by overeating and a lack of satiation after meals, both of which may contribute to obesity, says Randi Hagerman, medical director of the MIND Institute at the University of California, Davis.

The findings might help researchers develop treatments to maintain life skills and prevent problems such as weight gain, Hagerman says. “This is valuable data.” She and her colleagues are testing the use of metformin, a diabetes drug, for decreasing weight gain and improving cognition in people with fragile X syndrome.

One limitation of the study is that it includes only a few people over 40, and few girls and women. The data also came from mothers and may be biased. Studies that draw on data from multiple observers may be more reliable.