Long neglected, severe cases of autism get some attention 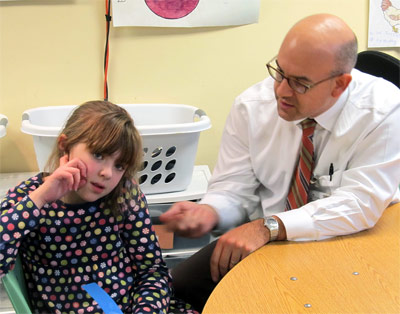 Safety first: Matthew Siegel is particularly interested in treating aggression and self-injury, the two behaviors most likely to send a child with autism to a psychiatric hospital.

On 29 October, Wendi O’Donovan got a call she had been dreading: Her 17-year-old son, who has autism, had been expelled from his group home. Usually, Ryan, who is 6’4” and weighs 230 pounds, is what his mom proudly calls “my gentle giant.” His verbal skills are limited and his primary interests, Barney and Sesame Street, are more typical of toddlers than teens.

But when Ryan’s routine is disrupted and he becomes overwhelmed, his immature impulses are carried out by the body of a near-adult. “He doesn’t punch or kick,” says O’Donovan. “But he’ll bite — and he’s so big, you can’t stop him.”

Ryan has the most severe form of autism, which involves minimal or no language ability, intellectual disability and behavioral outbursts that can pose a risk to himself or others. These sorts of cases are heartbreaking for the families and are also the toughest for educational and medical systems to handle. However, only a tiny proportion of autism research includes them, leaving families and clinicians with little information to guide care.

That’s about to change. Next February, researchers plan to begin work on a $1.2 million project that aims to link specialized psychiatric units across the U.S. to investigate the most severe and challenging autism cases.

The study will include the six largest of the nine specialized psychiatric hospital programs for autism in the U.S. About 1,000 individuals with autism, aged 4 to 20, typically spend between 20 and 25 days at a time in these programs.

“We think this is an area we can contribute [to],” says lead investigator Matthew Siegel, medical director of the developmental disorders program of Spring Harbor Hospital in Maine. “If not us, who? We have the expert clinicians and see hundreds of these kids.”

Siegel founded the research group in 2011. It now includes at least 17 collaborators, mainly medical and program directors of the specialized units.

The researchers hope to enroll at least 500 participants. They are especially interested in discovering how best to treat aggression and self-injury. Siegel estimates that about 85 percent of children with autism who are admitted to special psychiatric units are brought in because of these behaviors.

He notes that when people with autism are seen in psychiatric hospitals, their stays are often disastrous because many clinicians aren’t educated about or equipped to meet their needs for routine and calm. For families such as the O’Donovans, there is little guidance for getting good treatment.

Siegel and his colleagues are also seeking better ways of evaluating autism severity and measuring the intensity of conditions such as depression and anxiety that often co-occur with autism. More than 80 percent of children in the units also have intellectual disability, and 50 percent of inpatients with autism have little or no speech.

“If not us, who? We have the expert clinicians and see hundreds of these kids.”

Until two years ago, these specialized psychiatric programs had never collaborated on research. The new project may help them not just to guide practice in their own units but to improve treatment in the far more common general psychiatric settings in which children with autism may be hospitalized1. The researchers also aim to collect genetic and behavioral information that they can use to discern subtypes of autism and individualize treatment.

“The lack of research in this area has been a perennial problem both personally and scientifically,” says Matthew Belmonte, an autism researcher at the Groden Center in Providence, Rhode Island, who has a brother on the severe end of the spectrum and is not associated with the project.

There are many reasons for the data shortfall2,3. For one, nonverbal or minimally verbal children who cannot follow instructions “are not easy to study,” says Clara Lajonchere, vice president of clinical programs at the research and advocacy organization Autism Speaks, which is not involved in funding the project.

“We don’t have the diagnostic methods, and the research methods are not developed or targeted to kids with some of the most severe challenges,” she says.

Second, the sensory sensitivities of people with autism make brain imaging scans extremely difficult, even for those with mild symptoms. Lying still for a long time in an extremely noisy enclosed tube is impossible for most people with the disorder.

Families coping with the most severe cases often also have logistical issues that deter participation. “The families we are interacting with are wonderful,” says Siegel, “But even though they support research, they don’t typically have the time or energy to show up to 12 outpatient visits.”

The new collaborative aims to collect genetic material from children with autism and their families, about whom little is known. The researchers say they would like to begin to answer questions as basic as whether severe autism has different genetic roots than milder cases do — and whether the difference between the conditions is one of type or degree.

“Collecting biological specimens, having DNA and other tissue available is really going to be value added,” says Lajonchere. There are no plans to do imaging work, although Siegel doesn’t rule it out.

The project is funded by the Nancy Lurie Marks Family Foundation and the Simons Foundation, SFARI.org’s parent organization. Data from the project will be made freely available to all researchers.

For Wendi O’Donovan, the results can’t come fast enough. For people like Ryan, she says, “This could be world-changing stuff.”