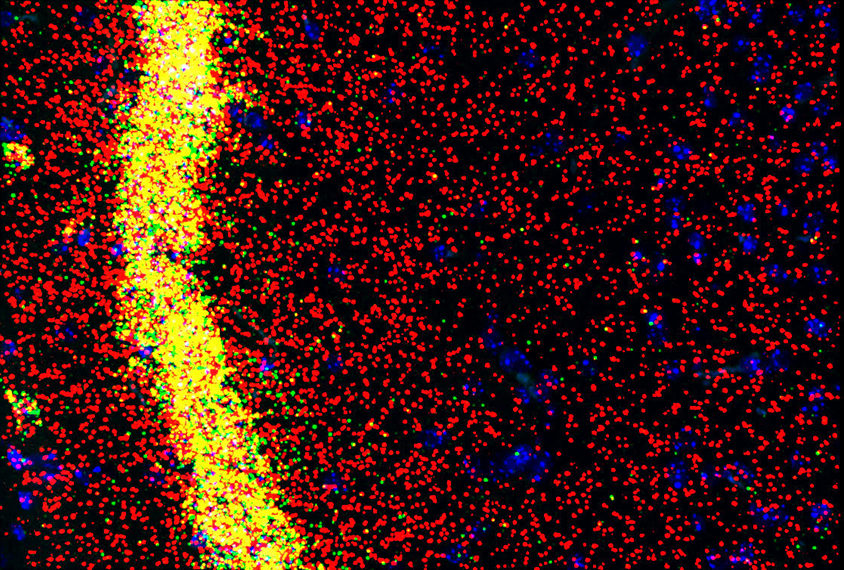 Made to multitask: FMRP binds a different set of mRNAs near synapses than it does in the body of a neuron.

FMRP, the protein associated with fragile X syndrome, binds different molecules depending on its location in neurons, according to a new study in mice.

Fragile X syndrome, which often co-occurs with autism, is the most common form of inherited intellectual disability. People with the condition have a mutation in the FMR1 gene that prevents their cells from producing FMRP.

FMRP regulates the production of about 1,000 other proteins by binding messenger RNA (mRNA). At synapses, this regulation helps to strengthen or weaken connections between neurons, which facilitates learning and the formation of memories.

But FMRP is present throughout neurons, and many of the mRNAs to which it binds have functions unrelated to shaping synapses, says lead investigator Robert Darnell, professor and senior physician at Rockefeller University in New York City. So it was unclear why the protein latches onto such a diversity of mRNAs, he says.

The new work shows that FMRP serves a distinct role within the body of neurons, separate from its action at synapses, and binds to mRNA involved in the regulation of chromatin, the complex of DNA and proteins coiled in the nucleus.

The findings help explain “how FMRP exerts its specific functions despite the fact that it binds so many different mRNAs,” says Christina Gross, associate professor of neurology at Cincinnati Children’s Hospital Medical Center in Ohio, who was not involved in the study. “It has different functions depending on its location.”

Darnell and his colleagues engineered mice to express fluorescently tagged FMRP in a subtype of excitatory neurons in the hippocampus, a brain region central to learning and memory. Then, using a specialized technique dubbed CLIP for short, they irradiated the animals’ brains to essentially freeze in place any protein-bound mRNA.

The researchers dissected the brain tissue to flag where in a cell each fluorescently tagged FMRP was found, and then processed the tissue to identify the mRNAs bound by the protein.

“What we found was completely unexpected,” Darnell says.

He and his colleagues identified the 1,265 mRNAs bound by FMRP in the hippocampal neurons, similar what was seen in previous research. But the mRNAs fell into two distinct groups based on location: Those found in the dendrites of neurons play a role in synaptic plasticity, whereas those located in the cell body are involved in chromatin regulation.

At both locations, FMRP acts as a brake, preventing ribosomes — tiny cell structures that translate mRNA into protein — from doing their job. Electrical activity is thought to release that brake, resulting in the production of proteins that, out at the dendrites, can strengthen or weaken synapses. When the electrical activity at a cell’s dendrites becomes strong enough to cause the neuron to fire an action potential, it also releases the brakes on FMRP in the cell body, and ribosomes there produce proteins that alter gene expression, the researchers suggest.

One explanation for FMRP’s dual function may be that the change in gene expression serves to tamp down the cell’s activity before it goes out of control, Darnell says, preventing seizures. Or, conversely, it may help increase a cell’s sensitivity when necessary. The results were published in eLife in December.

“This ties together nicely with the idea that protein-synthesis-dependent memory and learning could be dependent on this fragile X protein,” Darnell says. It also may explain the increased incidence of seizures in people with fragile X syndrome and autism, he says.

The mice engineered for this study, as well as the new location-specific list of FMRP-linked mRNAs, are important resources for the neuroscience community, says Gary Bassell, professor of cell biology at Emory University in Atlanta, Georgia, who was not involved in the study.

“What the neuroscience community needs to do now is to go through these lists,” he says, and identify which mRNAs are linked to impairments in long-term memory and other difficulties linked to fragile X syndrome. “They may be therapeutic targets down the road.”

Darnell says that he and his colleagues are thinking about that too: “We don’t understand a lot about autism and intellectual ability, or disability, in the context of where the problems are. If you want to direct therapies or drug enhancements, you would like to know which areas of the brain and which neuron types are involved. This opens the door to doing that.”

Though the researchers studied FMRP in only one type of neuron, it’s likely that the protein has a similar function throughout the brain, Bassell says. “That’s a hypothesis that has to be tested.”

And because people with fragile X syndrome often have difficulties with executive function, such as making plans and adapting behaviors, it would be helpful in future studies to examine the role of FMRP in the prefrontal cortex, the part of the brain that’s necessary for such higher-order thinking, Bassell says.