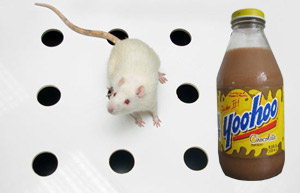 Chocolate cravings: Female mice aren’t as interested in treats as male mice are, but they are just as motivated to learn.

Deletion of an autism-linked chromosomal region leads to learning problems in male mice but not in females, according to unpublished results presented yesterday at the 2014 Society for Neuroscience annual meeting in Washington, D.C.

This difference may give researchers a window into the mechanism underlying the gender skew in autism. “This gives us a molecular grasp on the basis of this disparity,” says lead researcher Ted Abel, professor of biology at the University of Pennsylvania.

About four times as many boys as girls have autism, indicating that females may be protected from the disorder. In support of this theory, women who have autism tend to have more mutations and more severe symptoms than men do, suggesting that they require a greater genetic hit for autism to manifest. How women might be protected, however, is still unknown.

In the new study, researchers looked at male and female mice lacking one copy of a segment of chromosome 16 called 16p11.2. Deletion or duplication of 16p11.2 occurs spontaneously in roughly 1 percent of people with autism. It arises about equally often in males and females, but preliminary results suggest that more boys with the deletion have autism than do girls.

Nicola Grissom, a postdoctoral researcher in Abel’s lab, designed an experiment to suss out these gender differences. She designed an assay that can measure motivation and signal any deficits in the reward pathway, which has been linked to autism.

In the test, she initially offers the mice chocolate milk and then suddenly stops. The mice now have to learn to poke their noses into one of five holes in their cage to get the milk. The middle hole is lit up, and yields the milk.

“They work for Yoo-hoo; most reasonable animals would,” says Abel.

The first day, the mice explore all five holes, occasionally succeeding. The second day, they start to succeed more often, suggesting that they learn which hole has the milk. The female mutants do just as well as female controls on this task. But the male mutants take eight days longer than the male controls.

It’s the kind of result you don’t need statistics for, says Abel.

Grissom also analyzed what the male mice did the first day as they tried to learn. Male controls went to the two holes closest to the correct one about half the time, suggesting that they were getting close to figuring it out. The male mutants did this only 11 percent of the time.

The results show that there may be a gap between wanting something and figuring out how to get it, says Grissom.

“What if you like social interactions, for example, but you have a problem figuring out how to get it, or you have a problem knowing how to appropriately interact with people?” she says. “That could be potentially very devastating, and it’s not something we’re exploring very much in mouse models of autism at all.”

This suggests that the female mice actively seek out treats when they want them, but don’t do it as frequently, or mindlessly, as the males do, says Abel. Understanding how something turns into a habit could be interesting for autism research, he says. “What might happen in autism is that goal-directed behaviors become habit: They become repetitive, they become perseverative and they’re hard to break.”

The sex differences extend beyond behavior. Mutant males make less ERK1, a protein encoded by a gene in the 16p11.2 region. Females make as as much ERK1 as controls do, suggesting that they somehow compensate for the loss of one copy of the ERK1 gene.

This may be because the gene is regulated by estrogen, a female hormone. “It could be that estrogen is directly regulating ERK1,” says Abel. “That may be what gives them the resilience.”

The mutant males and females both have a smaller corpus callosum, the brain region that connects the two hemispheres of the brain, than controls do. However, only the male mutants have an enlarged region in the bottom of this area that connects to the hippocampus.

These results are consistent with other studies in mice, but they are nearly the opposite of the pattern seen in people, notes Elliott Sherr, professor of neurology at the University of California, San Francisco, who scans the brains of people with 16p11.2 deletion. “People with the deletion have bigger brains and in the mice they have smaller brains,” he says. “The bigger or smaller dichotomy has not been worked out.”