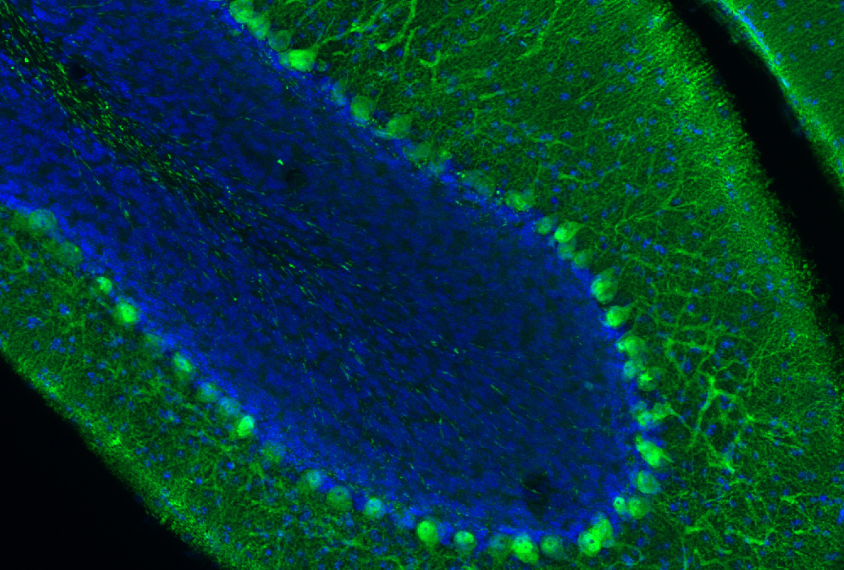 Population decline: Exposure to maternal inflammation in utero alters the number of neurons (green) in the cerebellum in mice.

Exposure to inflammation in the womb affects the brain and behavior of males and females differently, two new studies suggest1,2.

If the results hold up in people, they might help to explain why autism presents differently in boys and girls.

In utero exposure to immune responses is thought to predispose children to certain conditions, such as schizophrenia and autism. Researchers have used mock infections to identify changes in rodent and monkey brains that may underlie this risk, but most studies look only at males.

“Comparisons between males and females have very rarely been done in any psychiatric animal models,” says Mohamed Jaber, director of the Experimental and Clinical Neurosciences Laboratory at INSERM in Poitiers, France, who led the mouse study. This state of affairs has begun to change, however, following a 2014 mandate that requires researchers funded by the U.S. National Institutes of Health to include both sexes or to justify why they did not do so.

Results from the new studies are a step forward in understanding the role sex plays in the response to inflammation, but they’re scattershot and don’t offer an explanation.

“We’re still in very early days of figuring out mechanistically how that happens,” says Kathryn Lenz, assistant professor of psychology at Ohio State University in Columbus, who led the allergen study.

Still, the findings hint that sex is likely to be an important factor.

“This sets the stage and says that maybe this is something we need to explore more deeply,” says Peter Tsai, assistant professor of neurology at the University of Texas Southwestern in Dallas, who was not involved in either study.

Jaber and his colleagues injected pregnant mice with poly I:C, a compound that mimics a viral infection and stimulates an immune reaction. After the mice gave birth, the researchers put the pups through a battery of behavioral tests.

Male and female pups both show developmental delays in the first two weeks after birth: Females are slow to open their eyes; males have trouble righting themselves after being placed on their backs. But by the time the mice are 1 month old, only the males show problems; they have trouble with motor coordination and are less active and sociable than controls.

The researchers examined the mice’s brains in adulthood, counting neurons in several regions involved in movement and social behavior. Exposed males have fewer neurons in the motor cortex and across several parts of the cerebellum than controls do; exposed females show a decrease in only one area of the cerebellum. The findings appeared in March in Translational Psychiatry.

“We were very struck with these results,” Jaber says. “Females are almost completely protected against maternal immune activation.”

He and his colleagues are exploring factors in the brain, such as hormone levels, that might make males more vulnerable — or females more resistant — to the exposure.

In the allergen study, Lenz and her colleagues first conditioned female rats to become allergic to egg protein. They then exposed the rats to the protein during pregnancy.

They looked at the pups’ preoptic area, a brain region that controls sexual behavior. Male pups are known to have more branches on neurons in this area than females do. The number of branches in each neuron depends on the number and activity of mast cells — immune cells that mediate allergic reactions.

The researchers found that newborn females exposed to an allergic reaction in utero have more mast cells than controls do, but the number in exposed males is the same as that in controls. In both sexes, the exposure leads to an increase in the fraction of mast cells that appear to be active.

Other changes in the pups’ brains are sex-specific: Neurons in exposed males have fewer branches than usual; neurons in females have more than usual. As adults, exposed males make fewer attempts at mating than controls do and have a diminished interest in female odors; the females act more like typical males, by mounting other rats, for example. The results appeared in March in Scientific Reports.

“Anytime you do anything that perturbs those immune cells, you’re potentially going to impact the sexes differently,” Lenz says.

The findings show how immune cells can have an impact, but only in a small part of the brain, says Donna Werling, a postdoctoral fellow at the University of California, San Francisco, who was not involved in the study. “A lot of the regions we’re interested in with regard to autism, schizophrenia and neuropsychiatric conditions tend to focus on the cortex, and that remains pretty underexplored,” she says.

Lenz and her colleagues are investigating whether other types of immune responses affect mast cells in sex-specific ways. They are also exploring the effects of maternal inflammation on other brain areas, including those that regulate social behaviors, aggression and impulsivity.