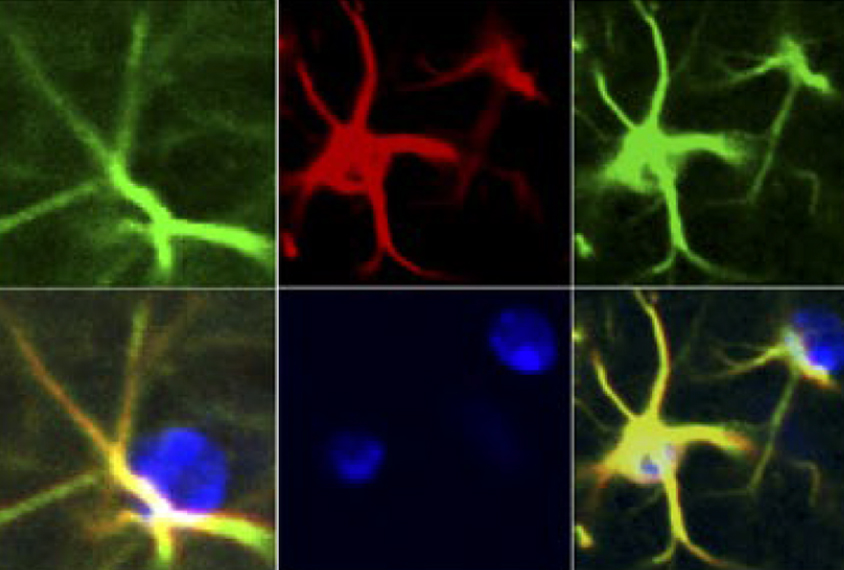 Seeing stars: Mice with prenatal exposure to an immune response have high levels of inflammatory molecules in their astrocytes.

Pregnant mice treated to mount an immune response have pups that show autism-like behaviors and altered levels of immune cells, according to a new study. Injecting the pups in adulthood with immune cells from other mice reverses both traits, the study also shows.

The work may help to explain the link between autism and infection or immune conditions during pregnancy.

The new study made use of the ‘soluble tachyzoite antigen’ from the parasite Toxoplasma gondii, which induces a broad immune response that resembles the one seen in autistic children — making it a good model for understanding the condition, says lead investigator Zikai Zhou, professor of neurobiology at the Shanghai Institute of Materia Medica at the Chinese Academy of Sciences and at the Shanghai Mental Health Center in China.

It’s “a really cool and comprehensive study,” says Amanda Kentner, associate professor of psychology at Massachusetts College of Pharmacy and Health Sciences in Boston, who was not involved in the work.

The findings also hint at the possibility of a new treatment strategy for altered immune molecules and autism traits in people, Zhou and his colleagues say.

When the immune system detects a pathogen, pro-inflammatory cells release cytokines, which recruit other immune cells to destroy it. Mice exposed to the Toxoplasma gondii extracts during pregnancy had, in relation to other immune cells, an unusually high proportion of these pro-inflammatory cells — particularly those that produce the cytokines interferon-gamma and IL-17 — and so did their pups, Zhou and his colleagues found.

By contrast, their proportion of regulatory T cells, which act to tamp down an immune response, were atypically low — resulting in too much inflammation overall.

The exposed mice also had unusually high concentrations of the cytokine IL-6 in their astrocytes, star-shaped brain cells that are thought to support synapses.

Behaviorally, the exposed pups are also atypical, the team found: At 7 and 9 days old, they vocalize more frequently and for longer than their unexposed peers. And they spend less time in open areas of an arena or a maze, and less time with other mice — suggesting they are more anxious and less social. They also bury more marbles, on average, and build nests in an unusual fashion — two behaviors that are traditionally viewed, perhaps controversially, as autism-like traits.

Intravenous injections of regulatory T cells from unexposed controls — an approach that has been tested for treating autoimmune and neurological diseases — restored the proportion of regulatory T cells and pro-inflammatory cells to normal levels in the exposed pups as adults. One week after the treatment, the animals showed more typical responses on tests of anxiety, social interaction and repetitive behaviors, the researchers found. Using regulatory T cells from the exposed mothers had even stronger effects on the mice’s behaviors and lowered IL-17 levels more significantly.

“Because these regulatory T cells already encountered the pathogen … they are primed and may exert higher immunosuppressive efficacy,” says Lior Brimberg, assistant professor of neuroimmunology at the Feinstein Institutes for Medical Research in Manhasset, New York, who was not involved in the study.

In line with this idea, the exposed mothers have a unique subset of regulatory T cells not seen in the control mice, the team found when they sequenced RNA from the two groups. These cells express more genes associated with enhanced cellular motility and cell migration. That motility might explain why exposed pups, when treated with cells from exposed mothers, also had significantly more regulatory T cells that crossed the blood-brain barrier.

“This shows proof of concept that these regulatory T cells are significant because they can enter the brain and potentially remodel the inflammatory microenvironment,” Kentner says.

Engineering regulatory T cells that have similar brain-infiltrating and immunosuppressive properties may be one way to translate the findings to treat autism traits that stem from immune alterations, Zhou says.

One limitation of the work is that it used only male pups — even though female animals are also affected by maternal immune responses.

“Girls and women are diagnosed with autism, too, and they should not be ignored by the science,” Kentner says.

The study also failed to mention the ‘litter effect’ — the fact that littermates have more similarities than non-littermates — which could affect the reproducibility of the work, Brimberg says.

It will be important to see if the results hold up in this and other models of maternal immune activation, she says.

Figuring out how long the results of the treatment last is also paramount, Kentner says. If they’re temporary, “this would affect feasibility and the acceptability of this [treatment] ever being adopted as a clinical intervention,” she says.

A previous version of this article stated that the new approach induces an immune response resembling that elicited by the live T. gondii parasite. The study authors did not directly compare these responses.