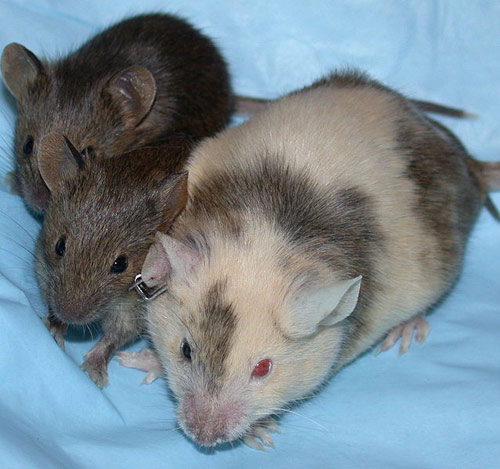 Lasting effects: Pups born to mice treated with immune-stimulating molecules are less likely than controls to communicate and interact with other mice.

Molecules generated by an immune reaction in pregnant rats affect the brains of their offspring, leading to changes in gene expression, according to a study published 30 January in Brain, Behavior and Immunity1.

The offspring of immune-stimulated mice also display behaviors that mirror the core symptoms of autism — social and communication deficits and repetitive behaviors — according to another study published in the same issue2.

Together, the studies provide further support for the immune activation model of autism, which suggests that an immune response in a pregnant woman, due to infection or an autoimmune disease, could lead to autism symptoms in her children.

This theory is supported by number of studies, including epidemiological reports showing that mothers of children with autism are more likely than controls to carry antibodies that attack brain proteins and to have elevated levels of cytokines, the molecular soldiers of the immune system.

A 2010 study also shows that abnormally high levels of one cytokine, IL-8, in the blood of pregnant women are associated with altered brain development in their children.

And treating pregnant mice with molecules that provoke an immune reaction leads to a number of deficits reminiscent of schizophrenia in their pups, including an enhanced fear response.

The second of the two new studies expands on these findings by examining the male pups of mice that were treated with an immune-stimulating molecule during pregnancy for deficits in each of the core symptoms of autism.

The pups are less likely than controls to emit ultrasonic vocalizations, mouse cries that are inaudible to humans, when separated from their mothers, and as adults when they encounter either male or female mice. They are also only half as likely as controls to urinate on a female scent-mark, even though they investigate the marked area as often as controls do. Both findings suggest deficits in communication.

The pups of treated mothers also spend less time than controls investigating another mouse in an adjacent chamber, an indicator of social deficits; and they bury almost three times as many marbles placed in their cages as controls do, suggesting they have restricted interests.

The first new study gets at the mechanism behind these deficits, by looking at the levels of cytokines in the blood and amniotic fluid of immune-activated pregnant rats and in the brains of their offspring.

Four hours after a pregnant rat receives an injection to stimulate her immune system, the brains of her unborn pups show several alterations in gene expression, one of the most significant being changes in genes that affect the development and function of the nervous system. There are no changes in gene expression in the fetal rats 24 hours after immune activation, however.

Pups born to the immune-activated mothers in this study also show less interest in a novel mouse in their cages than controls do, the study found.

The results suggest that a spike in cytokine levels in pregnant rats can lead to short-term changes in gene expression in key pathways at a crucial stage of brain development.