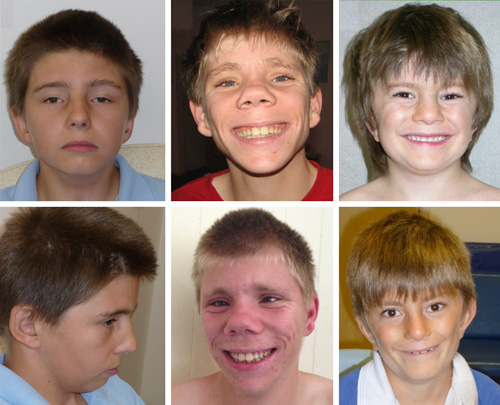 Striking features: Children with SETD5 mutations have distinct facial features that include full, broad eyebrows and a long, tubular nose.

Newly discovered mutations in a gene called SETD5 caused intellectual disability and autism-like symptoms in seven children, according to a study published 3 April in the American Journal of Human Genetics1.

Little is known about SETD5, which belongs to a family of genes involved in DNA structure and gene regulation. It is expressed throughout the body, but its levels are especially high in the brain2.

Harmful de novo mutations — which arise spontaneously rather than being passed down from parents — show up in about half of individuals with severe intellectual disability who do not have large genetic disruptions such as chromosome rearrangements. Determining if those mutations cause the disability, rather than simply being associated with it, is challenging.

In addition to intellectual disability, these children share some symptoms, including problems with swallowing and chewing; skeletal abnormalities such as curved spines; and speech, motor and developmental delays. Five of the children also have behavioral problems, including compulsive behaviors, hand flapping and autism.

After comparing the SETD5 variants in these children with those in thousands of other people with and without intellectual disability, the researchers concluded that the variants are a likely cause of the children’s condition.

These children could not have been grouped together under a common diagnosis without genetic testing, the researchers note. They suggest that genotyping should be used more often to distinguish between different types of intellectual disability.