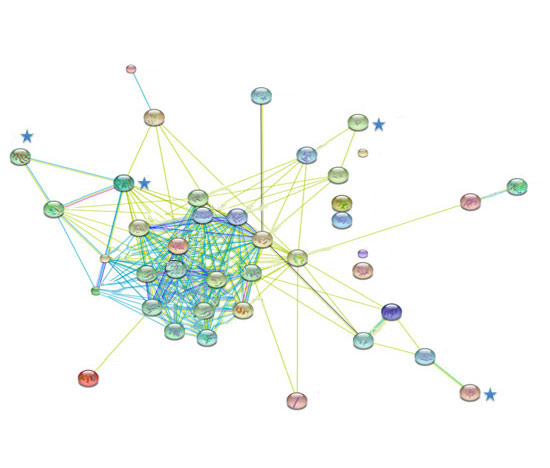 string-db.org Teamwork: Mutations in multiple linked genes, such as those in the glutathione pathway, may be needed to cause autism.

Variants of three genes involved in a metabolic pathway together raise the risk of autism, according to a study published 5 March in the Journal of Neurodevelopmental Disorders1.

Studies have implicated several genes in autism, but these account for only 10 to 20 percent of cases of the disorder.

One reason for the low numbers may be that the combination of multiple gene variants is often needed to lead to autism. For example, deletion of the 16p12.1 chromosomal region exacerbates the effect of other large duplications and deletions.

However, the traditional method for linking a gene variant with autism — called genome-wide association analysis — does not take multiple factors into account.

In the new study, researchers used statistical analysis to identify combination associations between autism and 308 variants in 42 genes related to glutathione metabolism.

Glutathione is an antioxidant, meaning that it protects cells from chemically reactive molecules that can damage them. Studies have shown that children with autism have lower-than-normal levels of active glutathione in their blood2.

Variants in three genes — cystathionine gamma-lyase (CTH), glutaredoxin (GLRX) and glutaredoxin 3 (GLRX3) — together increase the risk of autism four-fold, the study found. CTH is required for glutathione production and recycling, whereas the GLRXs regenerate proteins that remove oxidative byproducts from the cell.