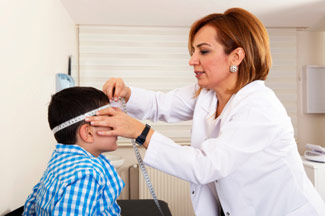 Big bones: A subset of people with autism who have large heads are also much taller and heavier than average.

Children who have autism and large heads may belong to different clinical subsets based on the ratio between their head size and height, according to a study published in the February issue of Autism Research1.

The results suggest that these subgroups could point the way to distinct genetic risk factors.

About 20 percent of people with autism have macrocephaly, defined as a head circumference that is above the 90th percentile (or above the 85th percentile for people who are shorter than average). A small study using postmortem brains suggests that this may be the result of excess neurons in the brain.

Children with autism who have large heads may also weigh more and be taller than controls. This suggests that macrocephaly is one aspect of an overall increase in their body size.

In the new study, researchers looked at 185 individuals with autism who were evaluated at the medical genetics clinic at the University of California, Los Angeles, between 2008 and 2011. Of these, 33 have macrocephaly. The researchers compared their height, head circumference and weight with standard averages from the 2010 Centers for Disease Control and Prevention growth charts

Of the 33 people with macrocephaly, 5 have a mutation in PTEN, an autism risk factor linked to large head size. All but one of these individuals have extreme macrocephaly, with a head size in the 99.7th percentile or above, the study found.

Each of these subsets is accompanied by its own set of distinguishing symptoms, the study found. For example, of the ten people with disproportionate macrocephaly, eight have low muscle tone and five have a flat nose. About half of the people with relative macrocephaly have a bent pinkie finger, but only two have low muscle tone and one has a flat nose.