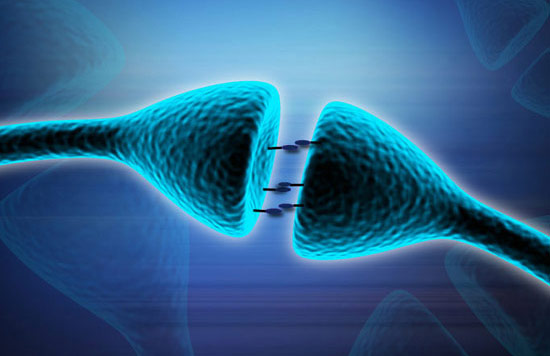 Sticky synapses: Cell adhesion proteins, which hold cells together by linking the junctions between neurons, may be involved in autism.

Mutations in a gene that organizes synapses — the junctions between neurons — may increase the risk of autism, according to a study published in February in Autism Research. The study bolsters evidence linking a pathway involved in cell to cell communication in autism.

Variants in CNTNAP2 — a gene involved in language development — are associated with autism and are thought to rewire connections between regions of the brain.

CNTNAP2 helps organize synapses by bridging the gap between neurons and binding to partners on the other side, including contactin 4, or CNTN4.

Deletion of the region on chromosome 3 that includes CNTN4 leads to a developmental disorder that includes intellectual disability and a small head size. Deletion of a portion of CNTN4 has also been found in two children who have autism. However, their father and a third sibling, who also have the deletion, are unaffected.

CNTN4 deletions have also been linked to autism in a second family, according to the new study: a child with severe autism, his sister who has language disability and his typically developing mother all have the deletion.

The study also found variants of CNTN4 in 4 of 87 individuals with autism and 1 of 102 controls. The changes are all in DNA bases conserved throughout evolution, suggesting that they have an important function.

The incidence of DNA variants in individuals with autism is not statistically significant and CNTN4 deletion is present in some people with no symptoms. However, the results suggest that mutations in this gene could contribute to a greater risk of autism. This could be the result of a combined effect with other mutations, which has also been suggested for CNTNAP2 variants.