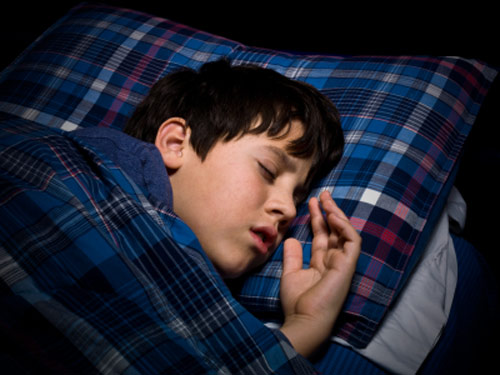 A subset of people with autism carry mutations in a sleep-related enzyme, according to unpublished research presented Friday at the Cell Symposia: Autism Spectrum Disorders: From Mechanisms to Therapies in Washington, D.C, a satellite conference of the Society for Neuroscience annual meeting.

Published and unpublished work has shown that some people with the disorder have abnormally low levels of the enzyme in their blood, and others have higher-than-normal levels in their stomach and intestines.

“If you ask people with autism, ‘What is your biggest problem?’ they will not say autism,” says lead investigator Thomas Bourgeron, professor of genetics at the Institut Pasteur in Paris. Instead, he says, they’re more likely to cite sensory sensitivities or gastrointestinal woes. “And if you ask their parents, they will say sleep.”

At night, an enzyme in the brain’s pineal gland called acetyl serotonin methyl transferase (ASMT) helps convert serotonin, a chemical messenger, to melatonin. Melatonin is a natural hormone important for sleep cycles and the immune system.

Studies dating to the 1960s have reported elevated levels of serotonin in the blood of individuals with autism. In the past 15 years, three reports have shown abnormally low levels of melatonin in the blood or urine of people with the disorder. And some children with autism have been reported to have more restful sleep after taking over-the-counter melatonin supplements.

The biological mechanism underlying these findings is still largely mysterious, but Bourgeron’s team is pinpointing some intriguing links between serotonin, melatonin and autism.

In 2008, Bourgeron’s team found that some individuals with autism carry rare or common mutations in ASMT, and have significantly less melatonin and less ASMT in their blood compared with controls1.

Comparing 43 individuals who have autism with 34 parents and 48 controls, the researchers also found that, regardless of genetic variants, the autism and parent groups have significantly less melatonin and ASMT in their blood than controls do. “This was a huge, huge, huge decrease,” Bourgeron says.

Last year, after screening hundreds of people with autism and hundreds of controls, the researchers reported that mutations in melatonin receptors are not risk factors for autism2. They suggested that this could be why melatonin treatment seems to work in children with the disorder.

In unpublished new work, Bourgeron has identified new ASMT mutations in people with autism and, in some cases, unaffected family members. “I don’t want to say that melatonin is a molecule for autism, but I think it’s interesting,” he says.

His group has also analyzed gastrointestinal tissue from ten individuals with autism and eight controls, courtesy of the Autism Tissue Program.

Overall, there was no difference in the average level of ASMT expression between the two groups, the researchers found. But two of the individuals with autism had high levels of ASMT, suggesting that it may be important for a subset of people with the disorder, he says.

Bourgeron’s group is collecting thorough clinical information, such as the level of hyperactivity, to try to pinpoint the specific behaviors that correlate with the abnormal melatonin function seen in some individuals. But for now, he says, the clinical significance is unclear.