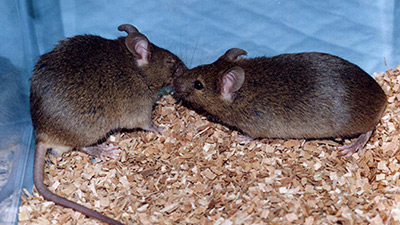 Differences in the background genetics of mouse strains may modify the effects of autism genes, suggests a study published 11 March in Autism Research. The study looked at the behavior of mice with a mutation in neuroligin-3 (NLGN3), a strong autism candidate gene.

The results, which follow a volley of conflicting findings on mice with the mutation, might help explain why people with the same autism-linked mutations can show disparate symptoms.

“It is important to understand why the autism phenotype can be so heterogeneous even in [people] with the same genetic cause,” says lead investigator Craig Powell, associate professor of neurology at University of Texas Southwestern Medical Center. “One very likely contributor is variation in the 20,000-plus other genes aside from the mutation.”

Scientists first identified the NLGN3 mutation in two brothers from Sweden, one with autism and intellectual disability and the other with a mild form of autism, then classified as Asperger syndrome. The gene encodes a protein that normally helps organize connections between neurons.

In 2007, a team that included Powell, Thomas Südhof at Stanford University and others introduced a mouse with the same NLGN3 mutation found in the Swedish brothers. This mouse, they reported, represented the first mouse model of autism’s social deficits. The mice also showed an enhanced ability to learn spatial cues to solve a water maze.

Their mouse was a hybrid of two strains — one known as 129, which is often used for gene insertion, and another called C57BL/6J or ‘B6,’ the most common inbred laboratory strain used for behavioral studies.

The following year, however, an independent team led by Jacqueline Crawley, then at the National Institutes of Health, used nearly pure B6 mice with only a small strip of genetic material from 129 mice that encompasses the NLGN3 mutation. These mice showed neither the behavioral deficits associated with autism nor a superior ability to navigate a water maze, casting doubt on the claim that mice with the mutation can model the disorder3.

The new study sought to address these conflicting findings. Powell and his colleagues looked this time at a pure 129 strain, and once again recorded the same behavioral problems they had seen in their hybrid.

The finding “doesn’t surprise me at all,” says Nils Brose, director of the Max Planck Institute for Experimental Medicine in Göttingen, Germany. Brose was not involved in any of these studies but has studied the effects of the neuroligin-4 gene (NLGN4) on mouse behavior.

NLGN4 is a close relative of NLGN3 and was linked to autism in the same Swedish brothers4. Although Brose’s lab found behavior mimicking autism in mice lacking a functional copy of NLGN4, other research teams were unable to replicate the finding.

Other mouse studies have also found diverse effects of a single gene mutation across different strains. In 2011, for example, researchers reported dramatically different behaviors in six strains of mice, all of which lacked the gene associated with fragile X syndrome.

However, the new study falls short of proving that the strain differences among NLGN3 mice are meaningful, says Richard Paylor, professor of neuroscience at Baylor College of Medicine, who led the study of background strains in fragile X mice.

To make their case, Paylor says, Powell and his colleagues would have had to reproduce Crawley’s results in the B6 mice or, better yet, to document variations in behavior in a number of other strains, as his team did with fragile X mice.

In fact, another study published last month in Disease Models and Mechanisms found negligible behavioral differences across several mouse strains carrying the same mutation in SHANK3, which is associated with an autism-related disorder called Phelan-McDermid syndrome5.

Pinning down exactly how the genetic background affects behavior is difficult in mice, and even more so in people, however.

“We’ve been looking for that smoking gun for a long time now, genetically speaking,” says Valerie Bolivar, director of the Mouse Behavioral Phenotype Analysis Core at the Wadsworth Center, New York State Department of Health. She was not involved in any of the studies.

It is possible, Bolivar says, to make changes in a mouse’s genome to pinpoint genes that might influence a mutation’s effects. “As we manipulate genetic backgrounds in the mice, it’s going to help us find out which genes play with other genes,” says Bolivar.

Identifying these modifier genes could eventually help develop treatments for autism, says David Threadgill, professor of genetics at North Carolina State University, who was not involved in the work. “Their mechanism of action is also highly important for understanding the etiology of autism,” he says. “They can change the course of an individual.”