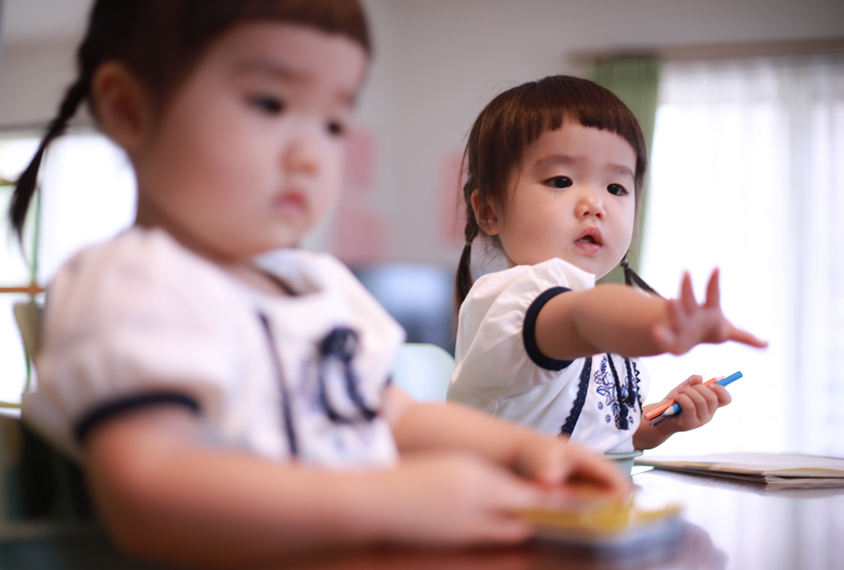 Give me: Reciprocal social behavior — the give and take of information or objects during interactions with others — is strongly heritable, according to an analysis of twins.

Some social behaviors associated with autism are heritable, according to a new study. But the extent to which genes and the environment influence these behaviors changes as a child grows, the results show.

The researchers examined toddlers’ so-called reciprocal social behavior, or the ability to engage in interactions such as sharing toys or conversing. Reciprocity skills vary in the general population, and prominent difficulties in this area can be a sign of autism. To estimate the heritability of these behaviors, the team measured them in a group of twins — including identical twins, who share nearly all of their DNA, and fraternal twins, who share about half.

Identical twins tend to have more similar scores on measures of their social behaviors than fraternal twins do, the researchers found, suggesting a strong genetic component. But the degree of heritability changed as the twins developed, suggesting that the influence of genetics and the environment on behavior is not stable, says lead investigator Natasha Marrus, assistant professor of psychiatry at Washington University in St. Louis, Missouri.

“Development doesn’t look static when we watch it, and I don’t think the biology underneath it is static either,” she says.

Because differences in social reciprocity are observable before the age at which autism is usually diagnosed, understanding how it develops could help researchers chart the condition’s early trajectory, Marrus says.

The paper, published in November in Development and Psychopathology, is an important first step toward creating measures of behavioral dimensions that appear in early development in autistic children, says Peter Mundy, professor of education at the University of California, Davis, who was not involved in the work. And it solidifies the idea that genetics influences these behaviors.

The researchers analyzed data from the parents of 1,563 18-month-olds. The parents watched a video of a typically developing 19-month-old interacting with an adult, rated how their child compared with the girl in the video on 13 items, and answered 31 additional questions about their child’s social behaviors, such as whether the child understands verbal requests or tries to play with other people. They repeated both tests when the children were 24 months old.

An analysis revealed that the children’s scores on some survey items tended to be correlated. A child who responds to her name, for example, is also likely to be interested in what others are doing, the researchers found. Based on these correlations, they identified five ‘dimensions’ of reciprocal social behavior: social motivation; functional communication; restricted interests and repetitive behaviors; social avoidance; and social orienting.

The team repeated the tests in a group of 134 identical twin pairs and 205 fraternal pairs, also at 18 and 24 months of age, and measured how similarly the twins scored on each of the five dimensions. They did additional modeling to differentiate the effects of genetics and shared and unshared environmental factors.

At both ages and for all five dimensions, identical twins had stronger similarities than fraternal twins, indicating that reciprocal behaviors are strongly heritable.

But the heritability of each dimension changed as the children grew. The influence of genetics on social motivation and functional communication waned from 18 to 24 months. By contrast, its influence on social orienting nearly doubled between screenings; it also increased, although to a lesser extent, for social avoidance and repetitive behaviors.

The results suggest that the interplay between genetics and environmental factors changes over time, Marrus says, with the environment playing a stronger role at some points than at others.

“Just because something is heritable, it doesn’t mean that exact same level of genetic influence operates over the entire course of your life,” Marrus says.

The apparent change in genetic influence may actually reflect decreasing errors in the measures used, Mundy says. A child’s language abilities, for example, would play a key part in the parent’s assessment of the child’s social skills, and language development is more varied in 18-month-olds than in 24-month-olds.

“I interpret this as consolidation of true score over time,” Mundy says. “I would think it’s not reflecting a major biological change.”

Dividing the broad category of ‘social behavior’ into specific dimensions could ultimately help researchers assess which interventions are effective, when and for whom, says Giacomo Vivanti, associate professor in the Early Detection and Intervention program at the Drexel Autism Institute in Philadelphia, Pennsylvania, who was not involved in the work.

“The boundaries between these constructs are really fuzzy,” Vivanti says. “We need a more fine-grained understanding of, ‘What are we talking about when we talk about social behavior?’”

“Being able to understand how to weigh all of those dimensions within an individual could be very important, especially early in life, to figuring out what is this child’s level of risk,” Marrus says.

That approach could also help researchers tease apart the heritable dimensions of other autism traits, such as motor skills development, Marrus says. Marrus and others have shown that eye-contact patterns, another indicator of social behavior, are heritable.