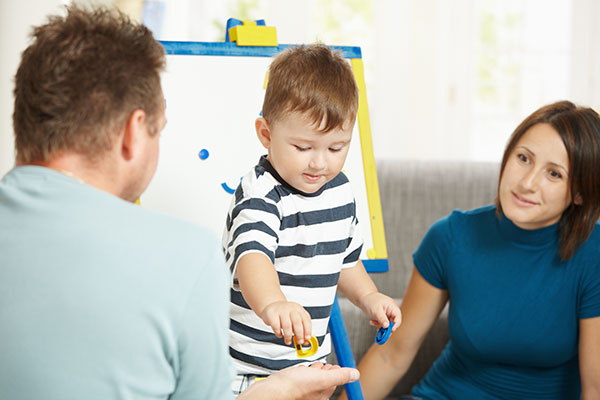 StockLite/Shutterstock.com Child’s play: In a new test, parents compare their child with a typical child who is interacting with adults in a video.

A 20-minute test enlists parents in assessing a toddler’s social development by showing them a video of how a typical child acts.The test, described 11 Februaryin the Journal of Child Psychology and Psychiatry, could sharpen researchers’ ability to measure changes in incipient social skills — in order to determine the effects of early interventions, for example1.It may also help clinicians track autism severity in children over time.

The test measures reciprocity — the ability to take turns in social interactions — in children between 18 and 24 months of age.In conversation, reciprocity involves responding to and building on the contributions of others. People with autism tend to struggle with this skill, instead remaining focused on their own interests.

But measuring reciprocity in toddlers can be challenging. Their ability to, say, pass a ball back and forth or communicate with adults is still nascent. As a result, children with emerging social impairments often do not differ starkly from children without them.

The essence of the new test, called the video-referenced rating of reciprocal social behavior, is a three-minute montage of a typically developing 19-month-old playing, smiling and communicating withadults. Parents watch the video and rate their child’s behavior against that of the child in the film. They also answer some questions about their child’s behavior.

For instance, the video shows the adult prompting the child to help put toys in a bag. The child complies, echoing the adult as she says “clean up” in a singsong voice. Caregivers then rate their child’s ability to “cooperate with an adult’s request for help” as less than, more than or to the same extent as the child in the video.

Caregivers also answer more general questions, such as whether their child is “on the same wavelength” as they are. These questions prompt parents to absorb the gestalt of how a 19-month-old acts and assess their child’s level of engagement accordingly. The researchers then translate the caregiver ratings into numerical scores, with higher scores indicating less advanced reciprocal social behavior.

The researchers recruited parents of 252 twins to participate in the study when their children were an average of 19 months old. The parents repeated the test roughly six months later.

Most children’s scores improved over time, reflecting the social gains that usually come with age. The scores dramatically worsened for one child, however. The researchers identified that child, who was an extreme case, as having undergone an autism-associated regression.

More importantly, results from the video tests were consistent with those from an autism screening tool, the Modified Checklist for Autism in Toddlers (M-CHAT).The same 30 children had high scores on the M-CHAT and on the video test.

The researchers also evaluated the test with parents of six children between the ages of 18 and 24 months who either had autism diagnoses or were suspected to have the disorder. These children, too, received high scores.

Overall, the video test can reveal subtle improvements in social behavior that would be missed by a tool like the M-CHAT, the researchers say. Its inventors plan to give it to anyone who asks for it.