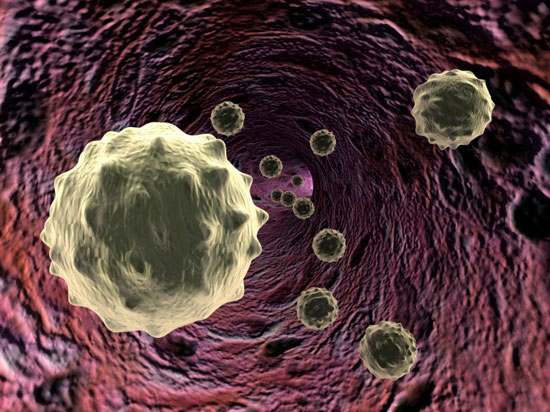 Blood simple: The expression pattern of as few as 30 genes in blood cells can identify autism with 98 percent accuracy, according to a new study.

If the method can be validated in a larger and more diverse sample, it may lead to a useful diagnostic test, researchers say.

The current standard for autism diagnosis, a thorough behavioral assessment, has several disadvantages, notes lead investigator Valerie Hu, professor of biochemistry and molecular biology at George Washington University. For instance, children may not show the full extent of their behavioral oddities on the test day, and their behavior may change over time.

“We’re aiming for a more objective, molecular diagnosis, if possible,” Hu says. “This is not it, but it’s a start.”

Last year, Hu compared the expression of some 40,000 bits of DNA in blood cell lines from three subgroups of people with autism — those who have severe language deficits, mild autism or savant skills — and healthy controls. She reported that compared with controls, 4,160 DNA fragments are expressed differently in the language deficit group, 502 in the mild autism group and 127 in the savant group1.

Those are far too many genes to analyze in a commercial diagnostic test, Hu says. So in the new work, she used sophisticated software models — called ‘classifier algorithms’ — to identify a much smaller set of genes whose expression pattern would best predict which individuals have autism.

By comparing blood cell lines of 87 men with autism with 29 healthy controls, she found that the expression patterns of 88 genes can discriminate which samples came from the autistic group with 94 percent accuracy. What’s more, when the 87 autism samples are divided by subgroup, the algorithm can use fewer genes — about 30 — and achieve accuracy scores of 98 percent.

These are exciting preliminary findings, and Hu says some companies have already contacted her to inquire about developing this method into a diagnostic test. But the test is far from being ready for the clinic.

First, the data must be validated on a larger set of people with autism. Second, they must be repeated using primary blood cells, rather than the cultured cell lines used here. Cell lines are easier to obtain because they can replicate indefinitely in the lab, but their expression patterns may be different from those of whole blood cells.

It’s also important for scientists to take into account the age of the participants, notes Louis Kunkel, director of genomics at Children’s Hospital Boston.

In Hu’s experiment, participants with autism were, on average, 12 years old, but their ages ranged from 5 to 28 years. Gene expression can change dramatically during development, meaning that a blood-based test would have the best accuracy for a defined age group.

For the past two years, Kunkel’s team has been comparing expression patterns in whole blood samples from more than 400 children with autism. The work is unpublished, but Kunkel says his analyses can distinguish autism from controls with 80 percent accuracy.

Kunkel’s participants are between 5 and 7 years old, and he’s also separately looking at a group of toddlers with autism, as well as at healthy siblings and parents.

“We’re hoping this would be an adjunct to other tests — so you do the blood test and the behavioral tests to come up with a true diagnosis,” Kunkel says. If the test is validated on the younger children, he adds, it could be used to screen for autism before symptoms emerge.

Both Hu’s and Kunkel’s tests are blood-based, but it’s not clear that gene expression changes in blood correlate with brain activity in people with autism, others note.

“I definitely think this approach is worth pursuing, though I’m a little cautious of how well it’s going to reflect what’s going on in the brain,” notes Janine LaSalle, professor of medical microbiology and immunology at the University of California, Davis. Researchers should compare these expression patterns with those seen in postmortem brain samples from people with autism, she adds.

Hu is also interested in studying the function of genes expressed differently in people with autism. Many of the genes identified so far, she says, do not code for proteins, and are responsive to androgens — hormones that some controversial studies have linked to autism. “We don’t know what they’re doing yet, but we’re trying to figure it out,” she says.