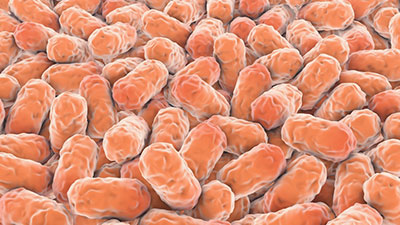 Good germs: Certain kinds of bacteria that live in the gut protect people from harmful strains such as Escherichia coli.

A strain of bacteria that lives in some people’s guts alleviates obsessive behaviors, anxiety and other symptoms in mice that model autism, researchers report today in Cell1. The finding supports the intriguing link between the gut, brain and behavior.

This strain, Bacteroides fragilis, is one of many bacterial strains that populate the digestive tract and are collectively referred to as the gut microbiome. Most of the strains are helpful, or probiotic, and protect people from harmful strains. B. fragilis in particular has been shown to protect mice from gut inflammation caused by bacteria such as Helicobacter hepaticus2.

The new study suggests that probiotics may improve behavior in people with autism, says Paul Patterson, professor of biology at the California Institute of Technology. “What we show in the mouse model is that if you block the gastrointestinal problem, you can treat the behavioral symptoms,” he says. “There’s a causal relationship.”

Patterson and his colleagues first injected pregnant mice with a mock virus. The resulting spike in immune activity is known to lead to autism-like behaviors in the pups. The pups obsessively groom themselves, for example, and are anxious and disinterested in other mice — all behaviors reminiscent of those seen in people with the disorder. They also make fewer and shorter vocalizations than controls do, suggesting deficits in communication.

A study published earlier this year found a similar trend in monkeys born to infected mothers. These studies are aimed at recapitulating the increased autism risk seen in children born to women who have a severe infection, such as the flu, while pregnant.

The new study is the first to show that maternal infection alters the microbiome in the offspring. The finding is significant for autism, as many children with the disorder are plagued by gastrointestinal problems, including diarrhea, vomiting and stomach discomfort.

“The possibility that there is a critical stage during gestation when inflammation in the mother can influence development of the fetal intestine is very intriguing,” says Dan Littman, professor of immunology at New York University, who was not involved in the study.

The mouse pups go on to develop a ‘leaky gut,’ a condition in which molecules produced by the gut bacteria seep into the bloodstream, and possibly reach the brain.

Leaky gut is also reported in children with autism and is associated with several other disorders, such as inflammatory bowel disease and Crohn’s disease, and perhaps with Alzheimer’s and Parkinson’s diseases, says Sarkis Mazmanian, professor of biology at the California Institute of Technology.

To diagnose leaky gut in the mouse pups, the researchers fed them a carbohydrate molecule attached to a fluorescent molecule. The molecule later turned up in their blood, showing it had escaped through the gut wall. The mice also showed elevated gut levels of an immune molecule called interleukin-6 (IL-6) — a prime suspect in mediating the effects of maternal infection.

“We are looking at an initial report in one mouse model. At best, they represent a subset of the autism population.”

This molecule, called 4-ethylphenyl sulfate (4EPS), has not been found in people with autism. However, two studies found elevated levels of a chemically similar molecule called p-cresol in the urine of people with autism3, 4.

“The beauty of the paper is that they actually pinpoint a potential metabolite,” says Sven Pettersson, professor of microbiology at Karolinska Institute in Sweden, who was not involved in the study. “The fact that a metabolite can change behavior is an intriguing observation.”

The researchers then treated the mice with B. fragilis. This strain of bacteria isn’t commercially available, but exists naturally in about 20 percent of the human population.

Mice treated with B. fragilis at 3 weeks of age don’t have a leaky gut five weeks later, their levels of blood 4EPS and gut IL-6 plummet, and the assortment of bacterial species in the gut reverts to something closer to that of control mice. And the mice do better behaviorally: They stop obsessively burying marbles in their cages, become as vocal as controls and are less anxious.

The mice don’t shake their social difficulties, however — they remain relatively uninterested when a new mouse is put in their cage.

“This is a real limitation in the conclusions from this study, as, in many ways, social interaction deficits are at the core of the phenotype of autism,” says Ted Abel, professor of biology at the University of Pennsylvania, who was not involved in the research. He suggests that other mechanisms may underlie the social behavior in these mice.

The researchers emphasize that the results are in mice and that they may model only one type of autism. “We need to be very cautious here. We are looking at an initial report in one mouse model,” says Mazmanian. “At best, they represent a subset of the autism population.”

Researchers also shouldn’t underestimate the challenges of trying to change the microbiome in people, says Littman. Finding a gut molecule that is elevated in people with autism and pinning down bacteria that reverse its production would be “a tremendous advance,” he says. “It’s very difficult to target the microbiome without knowing what’s going on.”

The researchers do, however, have promising preliminary results with mice that carry mutations seen in people with autism. They are now treating mice with commercially available probiotics and are planning a clinical trial with B. fragilis in people with autism. These are only the early first steps, notes Patterson. “I don’t want people rushing out trying to buy B. fragilis,” he says.