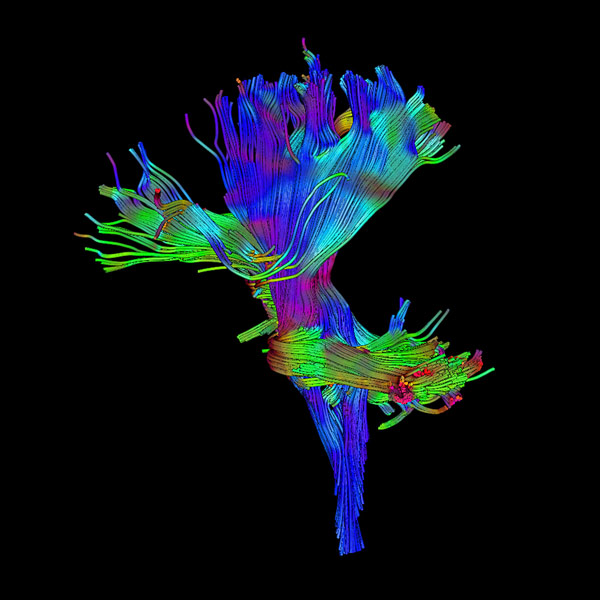 ©SPL/Science Source Broken link: Autism’s motor and social symptoms may trace back to a single nerve bundle in the brainstem.

A group of nerves at the base of the brain that govern movement are structurally compromised in people with autism, suggests a study published 23 May in the Journal of Autism and Developmental Disorders1. The lower the integrity of these nerves, the more severe a person’s autism symptoms.

Poor motor skills tend to accompany severe autism symptoms: Children with severe social deficits, for example, are often uncoordinated. They have trouble with large movements such as jumping, as well as with fine motor skills such as coloring2.

“Motor ability may be a window into what is happening in the brains of individuals with autism spectrum disorder,” says lead researcher Brittany Travers, assistant professor of kinesiology at the University of Wisconsin-Madison.

Scientists have developed behavioral theories connecting motor and social deficiencies in autism3. “One hypothesis suggests that motor deficits may impair the ability to understand others’ actions, leading to poorer social skills,” says Carissa Cascio, assistant professor of psychiatry at Vanderbilt University in Nashville, Tennessee, who was not involved in the study.

Motor and social skills are both thought to require integration of information across the brain, so Travers and her colleagues investigated whether problems in white matter, the nerve fibers that connect brain regions, might underlie both sets of symptoms. White matter is thought to develop differently in children with autism than in controls.

The researchers used a scanning technique called diffusion tensor imaging (DTI) to examine the microscopic structure of white matter throughout the brain. By measuring the diffusion of water molecules through the brain, DTI reveals whether white matter is intact or compromised in a way that impedes water’s flow. The researchers scanned the brains of 67 boys and men with autism, aged 5 to 33 years, and 42 unaffected peers.

To test motor performance, they measured the force with which the participants gripped a sensor and counted how many times they could tap a board in 10 seconds. They assessed social symptoms using a parent questionnaire called the Social Responsiveness Scale.

Participants with autism have a weaker grip and tap more slowly than the controls do, the study found. Within the autism group, a weaker grip tends to go along with poor social skills. The weakest individuals showed low integrity of white matter in part of the brainstem, a region at the base of the brain adjoining the spinal cord, relative to controls. This area relays sensory and motor information between the body and the brain.

The difference showed up most prominently in the corticospinal tract, a massive brainstem nerve bundle that conveys signals controlling voluntary movement.

Prior research has suggested that the brainstem in children with autism is smaller than average4. But the researchers did not expect the white matter discrepancy to be restricted to one area.

The new findings suggest that the link between the motor and social deficits in autism is indirect: Problems in brainstem white matter may underlie both, Cascio says.

Repeat scans in the same individuals may show how changes in white matter correlate with social and motor symptoms over time, says lead researcher Janet Lainhart, professor of psychiatry at the University of Wisconsin-Madison. Imaging may also reveal how communication between the brainstem and other parts of the brain influence symptoms, she says.

The researchers are investigating how a video game designed to hone motor skills in people with autism affects brainstem white matter, Travers says. “The goal is to see if we can find a fun and motivating way to enhance this brain region.”