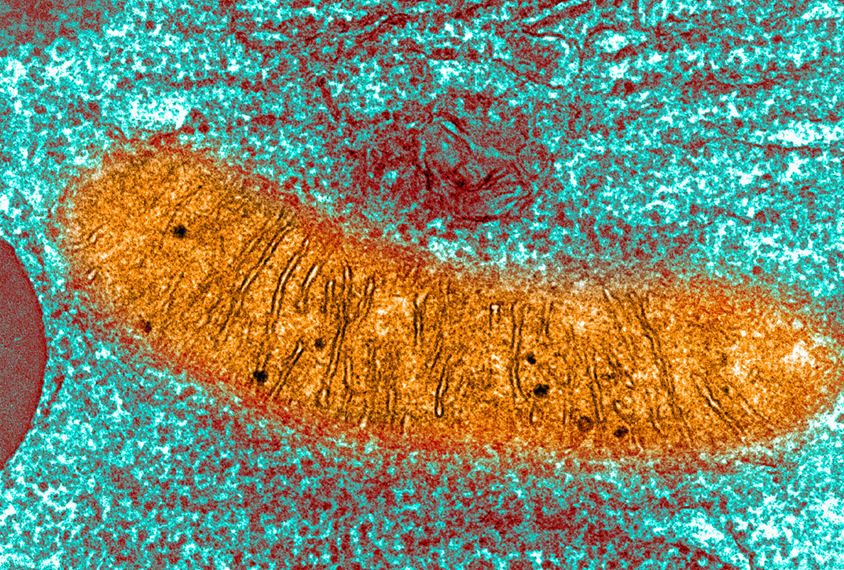 Hole picture: Leaks in the mitochondrial membrane may cause fragile X neurons to get stuck in an immature state.

Many problems associated with fragile X syndrome stem from a leak in mitochondria, organelles that act as the power stations of the cell, a new study suggests1. Stopping this leak eases some of the autism-like traits of mice that model the syndrome.

“The paper is very solid,” says John Jay Gargus, director of the Center for Autism Research and Translation at the University of California, Irvine, who was not involved in the study. And because mitochondrial energy deficiency is seen in other forms of autism, the findings may be relevant beyond fragile X syndrome, Gargus says.

Fragile X syndrome results from mutations in the FMR1 gene, which lead to a loss of the protein FMRP. Without FMRP, cells have immature dendritic spines — the bumps along a neuron’s arms that receive input from other neurons — and produce other proteins in excess. These differences are thought to contribute to the syndrome’s characteristic traits, such as developmental delay, intellectual disability and, often, autism.

The new study shows that a leak in the mitochondrial membrane, possibly caused by the lack of FMRP, may drive the affected cells’ immaturity and excess protein production. The leak affects a cell’s metabolism, causing it to produce energy quickly but not efficiently, says lead researcher Elizabeth Jonas, professor of internal medicine and neuroscience at Yale University.

All cells start out with mitochondrial leaks; the rapid energy production these leaks allow may be useful in early development. As typical cells mature and efficiency becomes more important than speed, however, they seem to close the leaks, Jonas says. Because cells with a fragile X mutation cannot close their leaks, they remain in an immature state.

Applying a compound that blocks the leaks leads to more mature metabolism and decreases protein production in neurons from fragile X syndrome model mice and in fibroblasts from people with the syndrome, the researchers found. And injecting fragile X model mice with the compound decreases their autism-like behaviors.

“It shows a very nice target: a single channel that can be manipulated,” says study investigator Pawel Licznerski, associate research scientist in medicine at Yale University.

Jonas, Licznerski and their colleagues observed that mitochondria from fragile X mice are smaller and produce less adenosine triphosphate (ATP), the molecule that transfers energy throughout cells, compared with controls.

A lollipop-shaped enzyme embedded within the mitochondrial membrane called ATP synthase produces ATP by pumping hydrogen ions into the organelle’s inner chamber and preventing them from leaking back out.

To see if the dearth of ATP was due to a problem with ATP synthase, the researchers isolated vesicles — bubbles of mitochondrial membrane containing ATP synthase — from fragile X mice and control mice. They put the vesicles into a bath containing dye that fluoresces when hydrogen ions are present.

ATP synthase from typical mice pumped all of the hydrogen ions into the vesicles and trapped them there, decreasing the intensity of fluorescence in the bath. But the bath with vesicles from fragile X mice remained highly fluorescent; the fragile X vesicles “couldn’t sequester any hydrogen ions,” Jonas says.

Vesicles from fragile X model mice also had significantly greater ‘membrane conductance,’ a sign that hydrogen ions move continuously in and out of the vesicles. This result suggests that the synthase can pump ions in, but they somehow leak back out through the membrane.

Treating the vesicles with the compound dexpramipexole blocked the leak and decreased the conductance, the researchers found. The work was published in August in Cell.

ATP synthase comprises multiple subunits. Compared with mitochondria in typical neurons, those in fragile X neurons have a significantly greater proportion of one subunit, called the c-subunit, the researchers found. This imbalance could explain why these mitochondria cannot trap hydrogen ions: The c-subunits can exist by themselves as channels in the mitochondrial membrane and allow hydrogen ions to leak out.

To close those channels, a cell must incorporate the c-subunits into new ATP synthases, a process that requires another subunit, called beta. The protein missing in people with fragile X syndrome, FMRP, regulates the manufacture of beta subunits, the researchers found. Unable to regulate how beta subunits are produced, Jonas and her colleagues say, mitochondria in the cells of fragile X mice remain leaky.

The persistent leak influences which metabolic pathway the cell uses to generate energy, the team discovered by using a technique called mass spectrometry. For example, fragile X neurons produce more enzymes associated with glycolysis — a pathway commonly used by immature cells — than do typical neurons. Previous studies have shown altered mitochondrial metabolism in people with other forms of autism2.

Adding dexpramipexole to the cells of fragile X mice decreased production of lactate dehydrogenase and other enzymes linked to glycolysis, suggesting that closing the leak causes the neurons to start to use different, more mature metabolic pathways.

Giving injections of dexpramipexole to fragile X model mice lessened their hyperactivity, repetitive behaviors and excessive grooming — traits that are reminiscent of those seen in people with autism and in those with fragile X syndrome. Mice that received the dexpramipexole injections also had neurons with more mature dendritic spines and decreased levels of protein synthesis.

Though interesting, the findings “do not provide a clear mechanism for how FMRP regulates the leak,” says Xinyu Zhao, professor of neuroscience at the University of Wisconsin-Madison, who was not involved in the study. Research by Zhao and her colleagues suggests that an interaction between FMRP and another protein is necessary for mitochondria to function properly and for cells to mature3.

Even without a mechanism, being able to ease autism-like traits in mice by closing one membrane channel “is remarkable,” Licznerski says. “This opens the door to a new approach to therapy” for people with fragile X syndrome, he says.

Others urge caution: There is no guarantee that a treatment that works in mice will work in the human brain, says Cecilia Giulivi, professor of molecular biosciences at the University of California, Davis MIND Institute, who was not involved in the study. She is concerned that these preliminary results will offer false hope to the families of people with fragile X syndrome and encourage people to seek out treatments that have not been proven safe. Dexpramipexole has been tested in people with the neurological disease amyotrophic lateral sclerosis and found safe, but it is unclear how it would affect young people if taken over sustained periods of time.

Before a treatment is possible, Jonas and Licznerski say they need to better understand how the ATP synthase subunits contribute to the leak. As part of that goal, they are engineering mice without extra c-subunits to see if minimizing the leak in that way has the same effect as applying dexpramipexole.