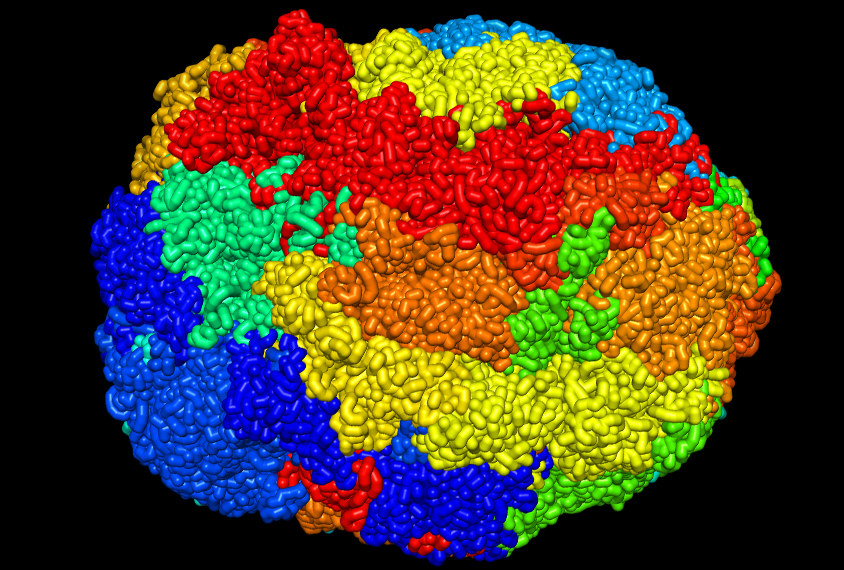 Shape shifter: Cells in the cerebellum have changes to the 3D structure of their genome long after birth.

Cells in the cerebellum show dramatic shifts in the 3D structure of their genome throughout the first year of a person’s life, according to new research presented yesterday at Neuroscience 2022 in San Diego, California. The results, compiled into an atlas of genomic architecture in the brain region over time, could help reveal how neurodevelopmental conditions such as autism alter neuronal function, the researchers say.

The human genome, if stretched out into a single strand, would be about 2 meters long. To fit into a cell’s 10-micron nucleus, it must be packaged tightly into chromatin, bundles of proteins and chromosomes. The resulting physical conformations — through which genes from distant parts of the strand can end up in close contact — influence gene expression and cell function.

This genomic architecture differs by cell type and changes with age in the mouse cerebral cortex, according to past research from the same team. But it was unclear if that held true for people and in the cerebellum, an area of the brain that comprises different cell types and that seems to develop atypically in autism, says Longzhi Tan, a postdoctoral researcher in Karl Deisseroth’s lab at Stanford University in California, who presented the work.

The new atlas “could provide unique insights into the molecular mechanism of neurodevelopment and autism, because both the cerebellum and chromatin organization have been repeatedly implicated in autism,” Tan says.

Tan and his colleagues assessed the genomic structure within 10,476 cells from mouse and human cerebellum tissue samples, from birth through adulthood.

The researchers determined the genomic structure of cerebellar cells using their previously developed method, called Dip-C, which cuts up a strand of DNA for sequencing while retaining information about which regions were originally neighbors. That information makes it possible to reconstruct the physical structure of the genome inside the cells’ nuclei.

At birth, the outer layer of cerebellar cells, called granule cells, in both mice and people have genomic forms similar to what is seen in cortical cells, Tan and his colleagues discovered, with most interactions occurring between nearby genes. But in both species, granule cells eventually reconfigure their genomes such that usually distant genes have an increased amount of contact.

Cerebellar cells take longer to mature and display more significant changes in their genomic structure than do cells from the cerebral cortex, the team found.

The genomic architecture of granule cells also continues to mature well after birth, and unlike that of cells in cerebral cortex, it exists at multiple stages of maturation at a time rather than maturing synchronously, the team found.

Mutations in the autism-linked genes ARID1B and CHD8, which are known to affect chromatin structure, did not alter the granule cells’ genomic structure in a small sample of adult mice, the team found. But it’s possible that other cells or earlier periods of development were affected by the mutations, Tan says. For now, the overall findings can serve as a resource for the development of cerebellar cells and a guide for how to investigate genomic structure further, he says.

“A cell’s destiny changes over time,” says Haruhiko Bito, professor of neurochemistry at the University of Tokyo in Japan, who was not involved in the work. Genetic changes that lead to conditions such as autism could very well affect a cell’s ability to shift genomic structure, he says, even if those changes are not immediately evident. “That’s why it’s very important that you are able to test how flexible and dynamic these nuclear states are during various stages of life.”