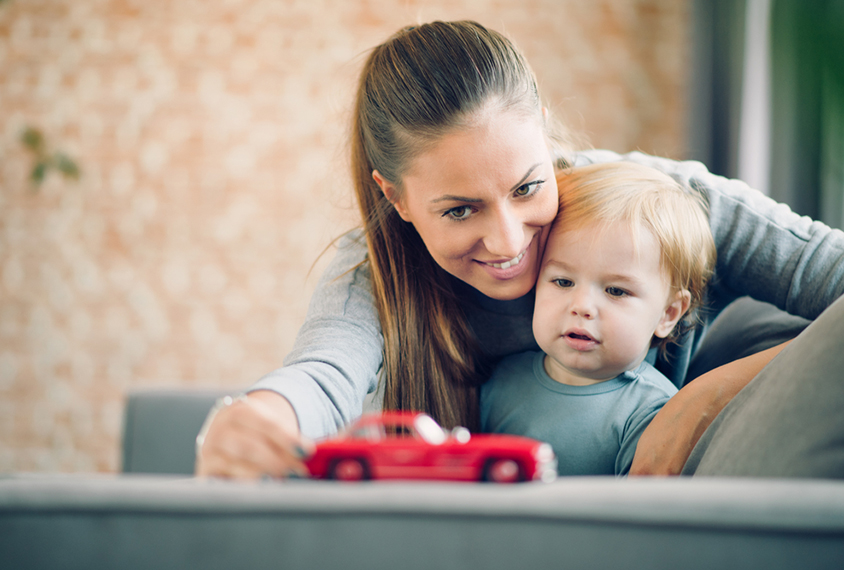 Coordinated action: The ability to draw another person’s attention to an object is a key developmental milestone.

At 10 months of age, infants later diagnosed with autism rarely draw others’ attention to an object or event, a new study suggests1.

The results hint that early treatments that focus on joint attention — a behavior in which two people focus on the same thing — could ease communication problems in autistic children.

“Joint attention is extremely important for normal development because it enables infants to learn about the world and to communicate with their parents,” says lead investigator Terje Falck-Ytter, professor of psychology at Uppsala University in Sweden.

Training children to initiate joint attention and encouraging parents to reward that interaction may improve the children’s communication skills, he and others say.

For example, Connie Kasari’s work has shown that teaching joint attention can improve language and cognition in toddlers and preschoolers, but interventions for babies are scarce, she says.

“Joint attention should be a target for intervention for prediagnostic infants,” says Kasari, professor of human development and psychology at the University of California, Los Angeles. “Maybe targeting these early behaviors is the way to go.”

The study is the first to use eye tracking to assess how babies initiate joint attention. It fits with other research over the past few years showing that joint-attention measures may help identify autism before other autism traits emerge, and with long-standing work showing that initiation of joint attention is particularly relevant to autism.

“[The study] is an excellent example of the burgeoning empirical work on joint attention in autism,” says Peter Mundy, professor of education and psychiatry at the University of California, Davis, who was not involved in the work.

Most previous studies of joint attention have involved manually identifying instances of joint attention captured on video. In these videos, however, it is often hard to pin down key aspects of the interaction — for example, how long a child or experimenter looks at an object.

The use of eye tracking enables researchers to quickly quantify various aspects of the exchange.

Falck-Ytter’s team studied 112 infants; 81 of the infants have an older sibling with autism, and so are more likely than the 31 controls to have the condition. Among the 81 ‘baby sibs,’ 22 were later diagnosed with autism.

The researchers tracked the babies’ eye movements in situations tapping joint attention at ages 10 and 18 months.

In one scenario, the babies sat on a parent’s lap as an experimenter turned her head to look at a puppet or kept her head still and moved her eyes toward the puppet. Eye-tracking software recorded whether the babies followed the experimenter’s gaze.

In another, a researcher talked softly to an infant and pretended not to see a flashing lamp nearby. The eye-tracking software recorded whether the child looked back and forth between the researcher and the lamp.

At 10 months, all the infants responded to experimenters’ bids for joint attention. However, the babies later diagnosed with autism did not look back and forth at the lamp as often as the other babies, signaling a problem with initiating the interaction.

“The fact that the 10-month-olds who later get diagnosed with autism didn’t check in with their adult partners is meaningful and consistent with a deficit in social interaction,” says Nancy Brady, professor of speech language hearing sciences and disorders at the University of Kansas in Lawrence.

A shift in gaze is not all that happens during joint attention, however. “It would be really interesting to see if other things, like smiling and vocalizing, showed differences too,” Brady says.

At 18 months, the typical toddlers made fewer gaze shifts to initiate joint attention than they had at 10 months. By contrast, the autistic children made more of these shifts at 18 months than at 10 months, the researchers reported in May in Biological Psychiatry.

“Not only is there a difference at 10 months, but it seems these processes are somehow developing differently [in autistic children],” says Falck-Ytter. “We don’t know exactly what that means at this point.”