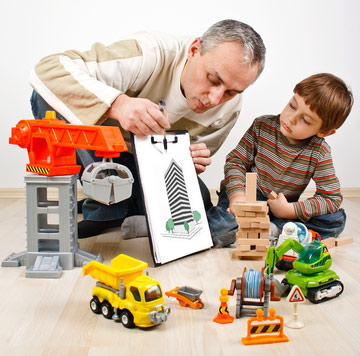 Simon says: Children who have autism struggle with joint attention, the ability to engage others’ attention.

Toddlers with autism who receive behavioral interventions that improve joint attention — engaging and following others’ focus — have better language ability five years later than do controls, according to a study published in May in the Journal of the American Academy of Child and Adolescent Psychiatry1.

Studies have shown that early behavioral interventions may be among the best available treatments for autism, but they are not effective for all children. Few studies have documented the long-term outcomes of this type of intervention.

In a 2006 study, researchers enrolled 58 children with autism in behavioral interventions for 30 hours a week, for five to six weeks.

The researchers divided the children into three groups2. In one group, the intervention focused on joint attention, for example by repeating back to the child whatever he or she said. In the second, researchers encouraged the children to participate in symbolic play, such as pretending that a doll can drive a car. The third group of children represented controls, and received standard treatment with no particular emphasis on joint attention or play skills.

In the new study, researchers followed up on 40 of these 58 children. Overall, regardless of the treatment group, the children who spontaneously engaged in symbolic play at 3 years of age have better language ability five years later, the study found.