Early treatment is key for children with Angelman syndrome 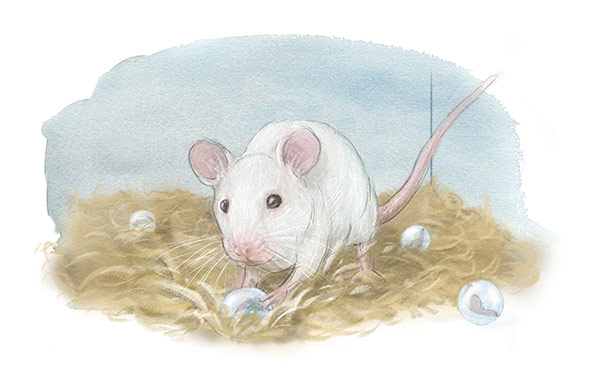 Fixing the gene that’s faulty in Angelman syndrome ameliorates anxiety and motor deficits in a mouse model of the disorder, but only if done when the mice are young.

The findings, published 1 May in the Journal of Clinical Investigation, suggest that experimental treatments for the syndrome must be delivered early in life1.

“If I had to design such a trial for our own Angelman syndrome clinic, I would do the first trial in young children,” says lead researcher Ype Elgersma, professor of neuroscience at Erasmus University in Rotterdam, the Netherlands.

Angelman syndrome occurs in about 1 in 15,000 children and is marked by problems with speech and gait, developmental delay and epilepsy. It stems from mutations in the maternal copy of the UBE3A gene. The paternal copy of that gene is normally silent, raising the possibility of restoring its activity to treat the syndrome.

Researchers have been able to rouse the paternal copy of UBE3A in mouse models of Angelman syndrome. But these mice still show repetitive behaviors and anxiety. The new study suggests this is because the treatment arrives too late in these cases.

In the study, researchers engineered mice in which they silenced the maternal UBE3A gene but can then activate it with a drug. When the researchers switched the gene on at the start of embryonic development, the rodents did not show the repetitive behaviors, clumsiness, anxiety and seizures that ordinarily characterize Angelman mice.

Reviving the gene in 3-week-old mice — the equivalent of toddlerhood in people — improved only their ability to balance on a rotating rod. By 6 weeks of age — rodent adolescence — the window for correcting the motor skill deficit closes.

The researchers also turned on UBE3A in Angelman mice on their first day of life by injecting their lactating mothers with the gene-activating compound, which made its way into the mothers’ milk. This early treatment alleviated anxiety — allowing the mice to explore open spaces — and made them less clumsy. Absorbing the drug only raised UBE3A levels to 63 percent of normal at most, suggesting that if a therapy could boost UBE3A levels higher, it might correct even more symptoms at that age.

The researchers then looked at the treatment’s effect on the brain. They found that restoring UBE3A expression at any age — even into adulthood — normalizes neuronal activity in the hippocampus, a region involved in memory. After the treatment, neurons there could change their connections in response to experience, a process called synaptic plasticity.

This effect on plasticity, which is thought to reflect learning, suggests that researchers could examine the ability to learn and remember in clinical trials for Angelman syndrome drugs, Elgersma says. He also recommends focusing on motor problems — the one symptom he and his team were able to ease in 3-week-old mice.

The remaining symptoms may respond to other treatments. Although activating UBE3A does not alleviate seizures in the mice at any age, standard epilepsy drugs do. “An important point  — and quite counterintuitive — is that restoring the gene is not necessarily the best achievable cure,” says Elgersma. Drugs that treat the symptoms might actually be more effective in certain cases.