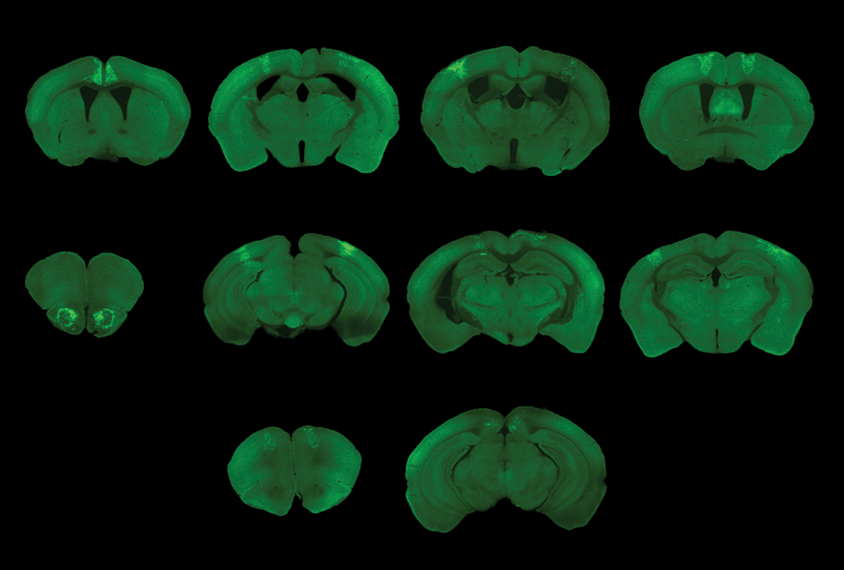 Green screen: Systematically deleting SHANK2 and SHANK3 from individual regions of the mouse brain shows how the genes contribute to different behaviors.

Deleting two autism-linked genes in one region of the brain leads to atypical social memory in mice, according to a new study. The findings point to how mutations in these genes shape autism-related social traits, the researchers say.

Mutations in SHANK2 or SHANK3 increase a person’s chances of having autism. The genes encode proteins that provide scaffolding at excitatory synapses, and the loss of this structure disrupts neuronal communication. But exactly how this disruption contributes to autism traits, and which parts of the brain are responsible, is unclear, says lead investigator Tobias Böckers, professor of anatomy and cell biology at the University of Ulm in Germany.

To probe the role of SHANK genes across the brain, Böckers and his colleagues engineered mice that do not express SHANK2 or SHANK3. Although people are unlikely to have this double mutation, the mice have strong autism-like behaviors — including communication difficulties and atypical social behaviors.

When the researchers limited the genes’ deletion to the retrosplenial cortex, a brain region that connects the hippocampus to sensory areas, the animals performed typically on all tests except for one of social memory — suggesting that this brain circuit alone accounts for certain aspects of the animals’ social differences. The findings were published last month in Molecular Psychiatry.

“The authors were very shrewd in using a double-knockout animal,” says João Peça, assistant professor at the Center for Neuroscience and Cell Biology at the University of Coimbra in Portugal, who was not involved in the work. Doing so, he says, helped reveal behavioral changes that arise from perturbations in subregions of the brain “which could otherwise escape unnoticed in other models.”

Böckers and his colleagues engineered the mice so that an enzyme called Cre might be used to delete a portion of SHANK2 and SHANK3 when the animals reached adolescence. The team injected a virus expressing Cre into 1 of 10 brain regions in 34-day-old mice and then tested them on a range of skills six weeks later.

Mice lacking SHANK2 and SHANK3 across the brain performed atypically on a classic test of sociability: They did not show the usual preference for interacting with another mouse over an empty cage. They also did not prefer a novel mouse over a familiar one — a sign of social memory deficits.

Animals that lost the genes in only the nucleus accumbens, a brain region linked to motivation and reward, performed similarly to control mice on both social tests but, like the mice with brain-wide loss of SHANK 2 and SHANK3, engaged in more repetitive grooming than controls did.

Mice with loss of the genes’ expression in only the retrosplenial cortex, on the other hand, had normal grooming habits. They also performed typically on tests of sociability, nest building, spatial memory and habituation to scents. Their social memory, however, proved faulty.

The retrosplenial cortex in these mice had significantly fewer excitatory synapses than that of controls, slices of brain tissue revealed. And after a cognitive test, they had fewer activated neurons, according to measurements of c-FOS, a protein some neurons express after they fire.

“When you take away essential proteins, then the circuit is not working well — the neurons are not activated as they should be in that situation,” Böckers says.

But chemogenetically activating neurons in the retrosplenial cortex for five consecutive days restored the animals’ social memory and increased the number of c-FOS-positive cells, Böckers and his colleagues found.

The study is a good step toward understanding how distinct circuits contribute to a condition’s different traits, says Camilla Bellone, associate professor of basic neurosciences at the University of Geneva in Switzerland, who was not involved in the work.

But questions remain about exactly how SHANK2 and SHANK3 contribute to changes in the circuit, she says. For example, although c-FOS correlates with a neuron’s firing, it is not a direct measure of activity. It would be interesting to assess whether the change in c-FOS expression represents a change in intrinsic excitability or a larger change in network behavior, she says.

Another question is what causes difficulty on the social-memory task, Bellone says. There could be factors other than memory, such as lethargy, that affect a mouse’s performance, she says.

Interpreting mouse behavior is a challenge, Böckers acknowledges. But what’s most compelling, he says, is the difference in the animals’ sociability versus their social memory — and the fact that whatever is altering one aspect of their social behavior can be rescued with chronic activation of neurons in the retrosplenial cortex.

“The selectivity tells me that the experiments cannot be completely wrong,” he says.

And because the atypical behaviors seen in the double knockouts can be induced and rescued during adolescence, researchers need to think about SHANK mutations as affecting more than just neurodevelopment, Böckers says. “It’s not the whole story.”

Böckers and his colleagues plan to study whether mice with a single SHANK deletion show the same differences. They also plan to use imaging data to see how activity in the retrosplenial cortex differs for people with and without SHANK mutations.