DNA droplets may be key to Rett syndrome, researchers say 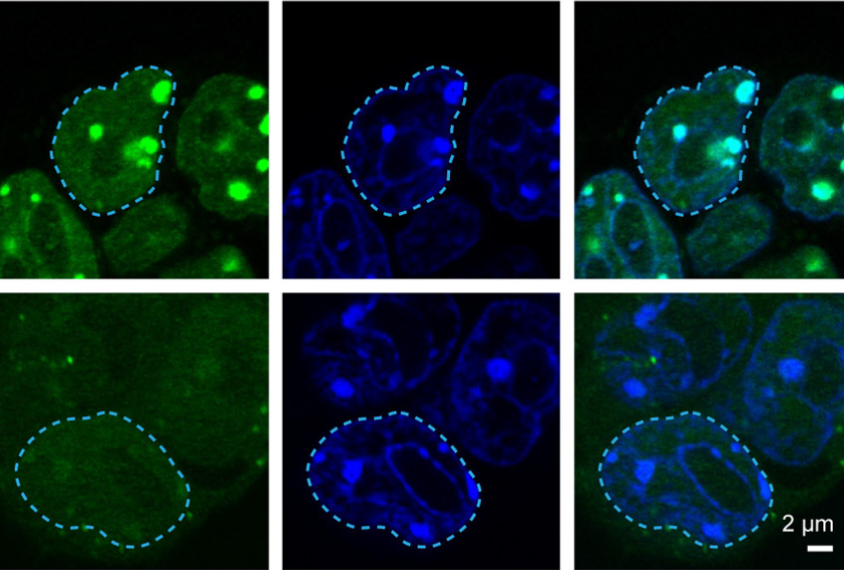 Problems with the formation of DNA-filled droplets that control gene expression may contribute to Rett syndrome, a new study suggests1.

Droplets routinely form throughout cells, akin to drops of oil in water, to compartmentalize molecules for various purposes, including the regulation of gene expression2. For example, droplets filled with tightly packed DNA, or heterochromatin, keep genes inaccessible and inactive3.

Mutations in the MECP2 gene, which are linked to autism and Rett syndrome, may disrupt the formation of these droplets, according to the new work.

MECP2 protein binds to patches of DNA that have molecular tags called methyl groups. It sometimes acts as a bridge between DNA and proteins that tamp down gene expression, but it has also been linked to gene activation, leaving researchers puzzled about its function, says co-lead investigator Rudolf Jaenisch, professor of biology at the Massachusetts Institute of Technology and the Whitehead Institute in Cambridge, Massachusetts.

Its newly discovered role in droplet formation, also called phase transition, could help to explain these different effects, Jaenisch and his colleagues say.

But not everyone in the field is convinced.

“It’s not quite clear what phase transitions add to our current understanding of how MECP2 works,” says Adrian Bird, Buchanan Professor of Genetics at the University of Edinburgh in Scotland, who was not involved in the study. “But I’m prepared to be shown wrong as more data accumulates.” Bird was one of the pioneers of the bridge model of MECP2 function.

If the findings hold up, they could provide a new treatment strategy for Rett syndrome, says Wendy Gold, head of molecular neurobiology at the Children’s Hospital at Westmead in Sydney, Australia, who was not involved in the study.

MECP2 is important for forming heterochromatin droplets, according to a study published earlier this year4. Jaenisch and his colleagues wanted to understand how the structure of MECP2 affects droplet formation.

They engineered mice that carry a fluorescent tag on MECP2 proteins and used a dye that binds to heterochromatin to stain brain slices from the animals. Using a microscope, they saw that both heterochromatin and MECP2 had collected in the same spots. Repeating the experiment with mouse embryonic stem cells yielded similar results.

To confirm that they were looking at liquid droplets, the team shined a laser on them to ‘bleach’ the fluorescent tags. Within 12 seconds, new unbleached tags appeared in their place. This sort of change is characteristic of dynamic structures such as liquid droplets; compartments with solid membranes cannot replace their contents so quickly.

When they put MECP2 protein into solution with DNA, they saw that it formed droplets around the DNA. Adding methylated DNA, for which MECP2 has an even higher affinity, caused the protein to form larger droplets. The work was published in July in Nature.

The results are consistent with what is known about how MECP2 interacts with DNA, says co-lead investigator Richard Young, professor of biology at the Massachusetts Institute of Technology and the Whitehead Institute. “But here for the first time, you’re actually seeing it in the context of a reconstituted liquid droplet.”

Some researchers, including Bird, have criticized this type of droplet assay for not accurately representing the cellular environment5.

Young acknowledges that the results should be interpreted with caution but says that the critiques are misguided. A number of nuclear regulatory processes are now understood to take place in phase transitions, and droplet assays have provided key insights into how the droplet-forming molecules behave, he says.

The researchers further connected the problems with droplet formation to Rett syndrome.

The MECP2 protein has a rigid region that binds to DNA and two floppy arms, one of which binds to other proteins. Mutations that affect the structured region, seen in some people with Rett syndrome, lower the protein’s ability to form droplets around DNA, the researchers found.

Other people with Rett syndrome have changes that cut short one of MECP2’s floppy arms. This mutation also lowers the protein’s ability to form droplets, the researchers found. And the more of the arm that the mutation removes, the more droplet disruption it causes.

MECP2 droplets should serve to cordon off heterochromatin and repress gene activity, Young says. But when the droplets are disrupted, other proteins that control gene expression may be “able to get in there and transcribe some genes that should be silent.”

As a result, the researchers suggest, cells do not express genes properly, something that has been seen in neurons from people with Rett syndrome.

The findings are exciting but “a stepping stone,” says Qiang Chang, professor of medical genetics and neurology at University of Wisconsin-Madison, who was not involved in the work.

“What is needed in the next step,” he says, is to see whether they can manipulate the MECP2 droplets and the molecular bridge separately. That would allow the researchers to better tease out the role that each mechanism plays in gene expression, and how their dysfunction contributes to Rett syndrome.

“How important this is will depend on the follow-up studies,” Chang says.

If dysfunction in MECP2 droplet formation is key to Rett syndrome, improving the formation of the droplets could potentially correct the condition. Young has started a company called Dewpoint Therapeutics that is looking for small molecules that can alter the size and shape of droplets. Though the company is not working on Rett syndrome, their findings may have implications for future treatments.