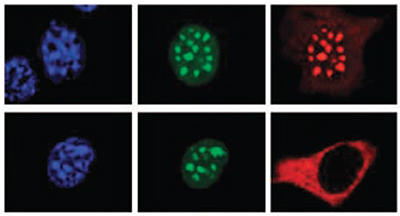 Prime spots: MeCP2 (green) brings a regulatory complex (red) to discrete sites of DNA (top), whereas a MeCP2 mutant does not (bottom).

Mutations in MeCP2, the Rett syndrome gene, prevent changes to DNA that dampen gene expression, according to two studies published 16 June in Nature and Nature Neuroscience.

Rett syndrome is an autism-related disorder caused by mutations in a single gene. Although this is clear, how these mutations lead to symptoms is less so. This is because MeCP2 dampens or boosts the expression of thousands of other genes, leading to a myriad of secondary effects.

Exactly how MeCP2 changes gene expression is also unclear. Researchers know that it binds throughout the entire genome — not just around genes — suggesting that it regulates overall DNA structure.

Studies have identified as many as 700 MeCP2 mutations in people with Rett syndrome. Mutations thought to alter MeCP2’s function, instead of merely inactivating the gene, cluster in two regions: MeCP2’s DNA-binding site and another site in the gene. Researchers have posited that MeCP2 may use this additional site to bind to another protein, forming a bridge between that protein and DNA.

One of the new studies, published in Nature Neuroscience, is the first to identify one such protein partner1.

The study found that MeCP2 binds to the NCoR/SMRT complex, which dampens gene expression by tightening DNA’s interaction with histones, the spools around which DNA winds. Four MeCP2 mutations found in people with Rett syndrome destroy this interaction. One of these, R306C, is found in five percent of people with the syndrome.

Introducing the R306C mutation into mice triggers many of the symptoms of Rett syndrome, the study found. The mice have motor deficits and clasp their hind limbs together, which is reminiscent of the hand flapping seen in Rett syndrome. They also have small brains relative to their body size and die young.

Another study, published in Nature, further elaborates the link between MeCP2 and NCoR2. The researchers found that neuronal activity adds a phosphate group to MeCP2 at three sites. Phosphorylation at one of these sites, which is only two amino acids away from R306C, blocks MeCP2 binding to NCoR.

Introducing a mutation that would prevent MeCP2 phosphorylation at this site — and so render permanent its interaction with NCoR  — also leads to Rett-like symptoms in mice. The mice have motor deficits and small brains.

These symptoms are milder than in mice with the R306C mutation, the researchers note. The phosphorylation mutation would be expected to increase MeCP2’s effect on gene expression, whereas the R306C mutation is likely to lessen it. This agrees with results showing that excess levels of MeCP2 lead to similar but milder symptoms compared with mutations or deletions of the gene.