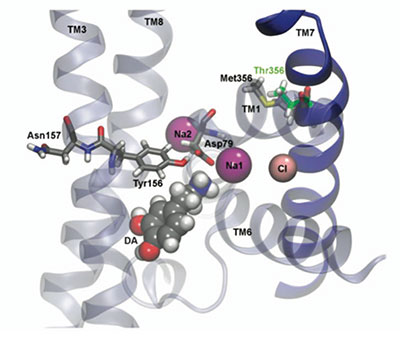 Signal solution: Zinc reverses the effects of some autism-linked variants in the dopamine transporter by altering its shape.

Several different mutations in the dopamine transporter, a protein that shuttles the chemical messenger dopamine into neurons, occur in people with autism. Experimental drugs can reverse the effects of some of these mutations, according to unpublished research presented yesterday at the 2014 Society for Neuroscience annual meeting in Washington, D.C.

Dopamine is a neurotransmitter that neurons release into synapses, the tiny spaces between them. It regulates movement and feelings of pleasure and motivation. Defects in dopamine circuits have been implicated in a wide range of psychiatric disorders, including Parkinson’s disease, schizophrenia, drug addiction and attention deficit hyperactivity disorder (ADHD). Roughly 30 percent of children with autism also have ADHD. Dopamine has also been linked to autism.

“Dopamine dysfunction may start to explain why some kids with autism are hyperactive, have tremors, motor deficits and these kinds of things,” says Aurelio Galli, professor of molecular physiology and biophysics at Vanderbilt University in Nashville, Tennessee, who led the new work.

Galli and his colleagues characterized five rare variants of the SLC6A3 gene, which encodes the transporter. One of the variants was reported in a person with autism in 20121. They discovered the remaining variants in six people with the disorder.

Last year, the researchers showed that a variant in the transporter known as T356M reverses the function of the protein: Instead of taking dopamine into cells, it spews dopamine out2.

“It’s like turning a vacuum cleaner into a leaf blower,” says Peter Hamilton, a graduate student in Galli’s lab who did the work.

Since then, the researchers have found that cells expressing the mutant protein no longer respond amphetamine treatment. However, they were able to partially restore the mutant’s transport function and response to amphetamine by adding zinc to the cells. “That shows that the problem isn’t permanent,” Hamilton says. Zinc may restore the transporter by altering its shape, Hamilton says.

A second variant, which results in the loss of the amino acid glutamine at position 336, also affects dopamine uptake and amphetamine responsiveness in a manner that can be reversed by zinc.

Other variants cause similar disruptions in the protein’s function, but do so in different ways. For example, the V559A variant lowers the amount of the transporter in the membrane, impairing dopamine transport.

The researchers link this problem to the addition of chemical tags known as phosphate groups to the protein. They restored the variant’s function by treating the cells with a compound that blocks the addition of the phosphates.

The fourth variant, dubbed A346V, shows reduced dopamine uptake but is enriched in the membranes of cells. The researchers say they don’t know yet why that is, but speculate that it may have to do with a cholesterol-binding site located nearby.

The final variant, called R51W, takes up dopamine as usual, but doesn’t leak the neurotransmitter in response to amphetamine treatment. The researchers have traced the defect to an interaction between the dopamine transporter and the protein syntaxin. They have also identified a mutation in syntaxin in one person with autism.

The researchers are exploring how these variants affect mouse behavior. Although preliminary, the findings have clinical relevance because amphetamine-like drugs are frequently prescribed to children who are hyperactive. “We have to really know what amphetamine is doing, particularly if kids are carrying these mutations,” Galli says.