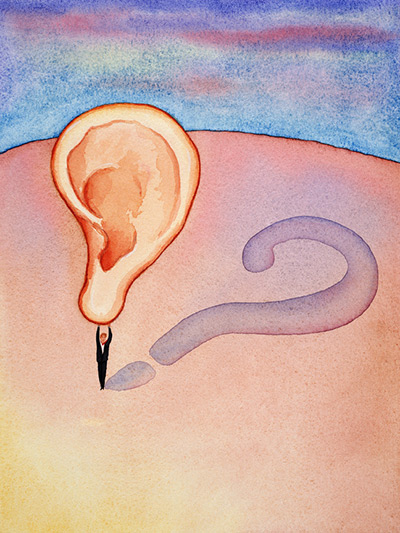 An ear muscle is more sensitive to loud sounds in children with autism than in controls, according to a study published 3 July in Autism Research1. The researchers say this measure could serve as a simple clinical biomarker of the disorder, but others fiercely disagree.

The so-called stapedial reflex causes the tiny stapedius muscle inside the ear to contract in response to a loud sound. The reflex pulls the stapes bone away from the inner ear, which dampens the sound’s effect and protects the inner ear from too much vibration.

In children with autism, the reflex is a split second slower and triggers at sounds a few decibels lower than in typical controls, the study found.

Doctors routinely test the stapedial reflex in babies, but usually only assess its existence. The precise timing and sensitivity of the reflex could be a biomarker that points to autism years before abnormal behaviors are apparent, the researchers say.

“We hope that this is something we could use for screening in really young children,” even newborns, says lead investigator Randy Kulesza, Jr., associate professor of anatomy at the Lake Erie College of Osteopathic Medicine in Erie, Pennsylvania.

A few groups are finding other physiological differences in children with autism, such as a high heart rate and slow pupillary response to light.

These sorts of tests are especially appealing because of their simplicity: They are inexpensive, fast and can be done in a doctor’s office. In contrast, most autism biomarkers depend on sophisticated and expensive technologies, such as brain scans.

Some scientists, though, are skeptical of the new test, saying the study relies on a small group of children and teenagers with autism who had problems with auditory attention or sound sensitivity.

“The idea that you could screen neonates based on this measure is just wild speculation,” says Gordon Ramsay, director of the Spoken Communication Laboratory at the Marcus Autism Center in Atlanta, who was not involved in the study.

The stapedial reflex is controlled by the brainstem, a conduit for nerves that transmit sensory information between the brain and the rest of the body.

In 1996, researchers in New York looking at postmortem brainstem tissue from a young woman with autism reported a “near-complete absence” of cells in the superior olive, a relay station for sound information2.

“That paper led me to the hypothesis that maybe these auditory pathways are disrupted in the autistic brain,” Kulesza says.

Several years ago, Kulesza began analyzing brainstem samples from the Autism Tissue Program, a repository of postmortem samples from individuals with autism and related disorders. As in the earlier study, Kulesza found that children with autism have dramatically fewer neurons in the superior olive than controls do3.

“Normally this structure has about 15,000 neurons. But in autism we consistently find only about 5,000, and sometimes even fewer,” Kulesza says.

Neurons in the superior olive are also involved in the stapedial reflex. In the new study, Kulesza searched 15 years of medical records from a nearby autism clinic, the Barber National Institute in Erie, for children who had been tested for this reflex.

The researchers identified 54 children with autism from the medical records and also gave the reflex test to 29 typically developing controls.

The test is quick and painless. The child wears a headset that simultaneously emits loud beeps and records pressure changes inside the ear.

Other groups have used different tests to probe the auditory brainstem response in autism. In a 2000 study, for example, researchers used electroencephalography — a noninvasive technique that measures brain waves through the scalp — to measure the so-called ‘brainstem auditory-evoked response,’ the pattern of brain waves triggered after hearing clicks or tones. Some children with autism and their unaffected family members show an abnormally slow EEG response, the study found4.

Finding reliable brainstem biomarkers could have big implications for the early identification of children with autism, the researchers say. Most children are not diagnosed with autism until age 3 or 4 years, but studies have shown that the earlier they begin behavioral treatments, the better. “The stapedius reflex can be done the day they’re born,” Kulesza says.

But the finding comes with many caveats. The researchers did not calculate the sensitivity or specificity of the measure, so it’s unclear how well it would predict whether a child has autism. They also did not look at the reflex test in children with other developmental disorders.

The new study is one of many on the sensory issues that frequently crop up in individuals with autism. Some children with the disorder are hypersensitive to sounds, for example, while others have trouble discriminating between different kinds of sounds.

If verified in other studies, the reflex test may give researchers clues about the brain circuits driving these sensory sensitivities, notes Tim Roberts, vice chair of radiology research at the Children’s Hospital of Philadelphia, who was not involved in the new study.

“Perhaps most encouraging is their notion that auditory deficits are a cardinal feature of autism,” Roberts says. His team has used magneto-encephalography and found that children with autism show delays during a later stage of sound processing, in the cortex, or outer layers of the brain.

But other experts point out that these cortical circuits are likely to be much more relevant to autism than the lower-level mechanisms in the brainstem. Studies dating back decades have not found significant problems with hearing and vision in people with autism. At least two of these studies found the stapedial reflex to be normal in children with autism5, 6.

“In autism, it’s probably not the physiological mechanisms themselves that go wrong,” Ramsay says. “It’s the way those mechanisms are deployed in the world to actively look for information in the environment.”