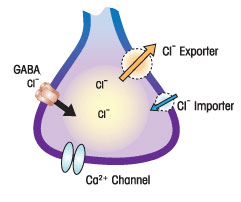 Quiet time: Bumetanide decreases the level of chloride ions inside cells, which in turn affects the cell’s ability to fire.

Bumetanide, a drug that’s long been used to treat high blood pressure, modestly improves social behaviors in children with mild forms of autism, according to the results of a small trial published in December in Translational Psychiatry1.

After three months of bumetanide treatment, 27 children, aged 3 to 11 years, improved more on the Childhood Autism Rating Scale (CARS) than did 27 children taking placebo. Children with severe symptoms of autism did not seem to benefit from the drug, however.

“Of course it doesn’t work for every kid, but the results were satisfactory enough to have virtually all of the parents want to continue when the trial was finished,” says lead investigator Yehezkel Ben-Ari, director of the Mediterranean Institute of Neurobiology at INSERM in Paris, France. He is also the founder and chief executive of Neurochlore, a company based in Marseille, France, that is developing bumetanide and related treatments for autism and other disorders.

Ben-Ari says many parents used the same phrase — “more present” — to describe their children’s behavior after taking bumetanide. The drug is a diuretic — meaning that it increases urine production — but it has no serious side effects, he says. “Some of the kids have been using the diuretic for two years now.”

Families and doctors are eager for new treatments for autism. Just two drugs, risperidone and aripiprazole, are approved to treat the disorder, and they improve irritability and aggression rather than social and communication difficulties.

Still, several experts are puzzled because the study used diagnostic measures of autism in unusual ways. They also say that the sample size is too small to know whether the effects are real.

“Until a big study with a better design is done, we can’t think of this as a real treatment,” says Elizabeth Berry-Kravis, professor of pediatrics, neurological sciences and biochemistry at Rush University Medical Center in Chicago. Berry-Kravis has led several clinical trials of treatments for fragile X syndrome and was not involved in the new work. “We have to think of this as an exploratory first step.”

In 2010, Ben-Ari’s group published results from a pilot study of bumetanide in five children with autism2. Although that trial found positive effects, it did not compare the effects with those of a placebo.

The new trial includes a placebo arm and is double-blind, meaning that neither the parents nor the researchers knew which children received bumetanide and which placebo.

The children took the drug or placebo in pill form once a day for three months. Some researchers say they worry that the drug’s side effects may have effectively unblinded some of the participants. Of the 27 children treated with bumetanide, 6 developed a potassium deficiency that had to be treated with a potassium syrup.

However, the psychologists who assessed the children did not know which children had received the potassium treatment, Ben-Ari says.

Children on bumetanide shifted from ‘severe’ scores on the CARS test to ‘mild’ or ‘medium’ severity scores. The change is statistically significant, but some experts question whether it means much.

“The changes in the CARS are puny and have no clinical significance,” says Catherine Lord, director of the Center for Autism and the Developing Brain at Cornell University in New York.

Lord and Berry-Kravis both note that the researchers implemented CARS in a strange way. The test is typically done by having a parent or a clinician who knows the child fill out a questionnaire. In the new study, the researchers instead made assessments of the children based on videos of their behavior, a method that has not been validated.

The findings were even less clear based on scores on the Autism Diagnostic Observation Schedule (ADOS), which Lord developed.

Bumetanide treatment was associated with statistically significant improvements on total ADOS scores only when the researchers removed the nine most severely affected children from the group. Seven of the nine were in the placebo group, suggesting that the placebo group was skewed toward the more severe end of the spectrum.

“I think this study, at least in terms of the outcome measures, is very problematic,” Lord says.

Ben-Ari admits that the study is small and that the differences based on severity may not persist in a larger study. “It’s very difficult to say which of the kids will be ameliorated. We need a much, much larger sample.”

In unpublished experiments, he says, his team used functional magnetic resonance imaging to show that the children taking bumetanide were more accurate in labeling facial expressions and showed more activity in brain regions related to social and emotional perception.

Ben-Ari’s team is planning to do another double-blind trial later this year, testing 80 children with autism with different doses of bumetanide, to see whether larger quantities lead to better outcomes. (The Simons Foundation, SFARI.org’s parent organization, is funding part of this trial.) If that goes well, he plans to launch a phase III trial of 120 children, recruited from several European sites, at the end of 2014.

Some children with autism have trouble taking pills. Neurochlore is developing bumetanide as a syrup that can be mixed with juice. The company plans to fund later clinical trials of bumetanide and is also developing alternatives to the drug.

Nobody knows exactly how the drug works in the brains of children with autism.

“Some of the changes, in some children, seem spectacular,” says Enrico Cherubini, professor of physiology at the International School for Advanced Studies in Trieste, Italy, who was not involved in the trial. “But the mechanism is completely obscure.”

Ben-Ari says his theory is that the drug works by altering levels of chloride ions inside brain cells.

Bumetanide blocks a chloride channel in the cell wall of a neuron, decreasing the level of chloride inside. This chloride level can determine whether gamma-aminobutyric acid (GABA), a chemical messenger that binds to a different chloride channel, has an inhibitory or excitatory effect on neurons.

In the adult brain, chloride levels inside the cell are lower than they are outside, so when GABA binds, chloride ions rush into the cell and make it more difficult for the cell to fire. But in the developing brain, GABA seems to have the opposite effect, according to Ben-Ari.

In 1989, he and Cherubini found that brain cells in newborn rats have excessive levels of intracellular chloride. When GABA opens chloride channels in these immature neurons, the ions rush out of the cell, rather than into it, triggering the cell to fire3.

Ben-Ari hypothesizes that GABA has a similar excitatory effect in certain brain disorders. Some infants with severe epilepsy don’t respond to anti-seizure medications, such as Valium, that turn up GABA activity4. And one small study of children with autism reported that Valium paradoxically causes them to be anxious and aggressive5.

Taken together, these studies led Ben-Ari to propose that autism stems from immature neurons holding too much intracellular chloride. “After insults, the brain returns to an immature state,” he says. “It recapitulates immature features, among them elevated chloride.”

Because bumetanide decreases chloride levels inside cells, it’s being tested in clinical trials in the U.S. and in Europe for treating epilepsy in newborn infants.

Ben-Ari says he assumes that’s why the drug works in autism, though it’s impossible to know for sure. “The proof that chloride is elevated in autism, I don’t have [that],” he says.

Other neuroscientists have called Ben-Ari’s hypothesis into question, claiming that the original result of GABA’s excitatory effects in the developing brain is the result of an experimental artifact6.

Ben-Ari’s team is trying to confirm his theory by looking at intracellular chloride levels in two animal models of autism: mice lacking FMR1, the gene that causes fragile X syndrome, and rats whose mothers were exposed to the common epilepsy drug valproate during pregnancy. Prenatal valproate exposure is a well-known environmental risk factor for autism.

However, the mechanism may be difficult to discern even with animal models because the disorder is so heterogeneous, notes Cherubini. In unpublished work, his group has found that in at least one mouse model of autism, GABA excites neurons in early brain development and then inhibits them later on, just as happens in controls.