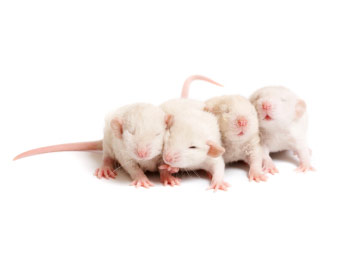 Separation anxiety: Mouse pups with extra copies of a gene in the Williams syndrome region cry more than controls do when separated from their mothers.

The duplication of a chromosomal region missing in people with Williams syndrome is associated with separation anxiety, according to a study published 8 June in The American Journal of Human Genetics1.

Williams syndrome is caused by the loss of one copy of the 7q11.23 chromosomal region. Children with the disorder have developmental delay, attention deficit disorder, problems with language, and social deficits, such as an intense friendliness, even towards strangers. Having too many copies of the same region leads to social deficits that resemble those in people with autism.

GTF2I, one of 25 genes in the region, is thought to be responsible for the social deficits associated with Williams syndrome.

A girl who lacks each gene in the Williams syndrome region except GTF2I has the facial features characteristic of the disorder, but does not have the social deficits. And a study published last year showed that mouse models lacking one copy of this gene are hypersocial.

In the new study, researchers engineered mice with one to four copies of the GTF2I gene. The more copies of GTF2I an 8-day-old mouse has, the more ultrasonic vocalizations it produces when separated from its mother, the new study found.

Researchers presented these results last October at the International Congress of Human Genetics in Montreal, Canada.

Parents of children between 1.5 and 5 years of age — 18 with the duplication and 181 with Williams syndrome — also filled out the Child Behavior Checklist. About 60 percent of parents of children with the duplication said that it is “somewhat” or “very” true that their child “gets too upset when separated from parents,” compared with about 18 percent of those with Williams syndrome.