Cognition and behavior: SHANK1 mutant mice do not model autism 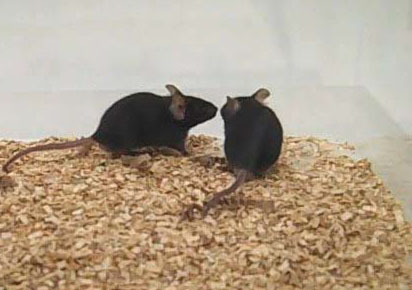 Furry friends: Mice with a mutation in the SHANK1 gene do not show social behavior seen in autism.

SHANK1 — a member of a family of proteins linked to autism — does not cause autism-like social deficits when mutated in mice, according to a study published online in the November Brain Research.

SHANK proteins organize connections between neurons, and researchers have identified mutations in both SHANK3 and SHANK2 in individuals with autism. Mutations in SHANK1 have not yet been seen in people with autism, but because its genetic sequence is highly similar to that of SHANK3 and the protein is expressed in the brain, some researchers have suggested that it may also be important in the disorder.

In the new study, Jacqueline Crawley and her colleagues performed behavioral tests for sociability, anxiety, repetitive motion and motor function in mice with mutations in both copies of the SHANK1 gene.

The researchers did not see any difference in social interactions — such as sniffing and following — or in repetitive grooming when they compared SHANK1 mutant mice with their healthy littermates.

However, the experiments showed one surprising result. In an assay for sociability, both mutant and control mice do not show any preference for a novel mouse over an object. The researchers suggest that this could be the result of either strain differences, or the effects of control mice interacting with their less social littermates or mothers.

The researchers did detect lower function in motor tasks — such as the distance covered in an open field or balancing on a rotating cylinder — in the SHANK1 mutant mice. They also saw a slight increase in anxiety as the mice avoided brightly lit chambers in a light-dark exploration assay. These results echo those of previous studies and suggest that although SHANK1 mice do not model autism, they do have some impairment in cognitive function.