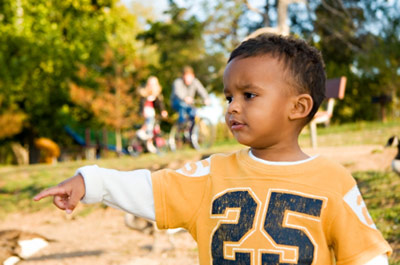 Quiet communication: Children with autism who have trouble speaking but understand language may communicate by other means, such as pointing.

In people with autism, the ability to speak may be closely tied to oral motor skills such as lip or jaw movement, according to a study published 1 July in Frontiers in Integrative Neuroscience1.

Language deficits, including problems with speaking (expressive language) and comprehension (receptive language), are one of the core features of autism. These problems may manifest in complex ways: Children may speak in an unusual manner (in a monotone, for instance, or limited to a few topics) or prefer nonverbal forms of communication.

Many people with autism also have problems with fine motor skills, such as manipulating objects, and gross movements, such as walking or sitting. Movements of the lips and jaw are needed to articulate words, so motor problems may affect language skills.

In the new study, researchers assessed the motor skills and language ability of 31 children with autism enrolled in a year-long behavioral intervention program in Bangalore, India2. They carried out the assessments before the program began, and at six and ten months during.

Prior to the intervention, children with deficits in both oral motor skills and fine motor skills had worse expressive language than those with better skills in those areas. Good motor-skill ability in all three domains — fine, gross and oral — is associated with better receptive language, the researchers found.

The results suggest that in some children with autism, oral motor skills influence the ability to learn to speak, the researchers say.