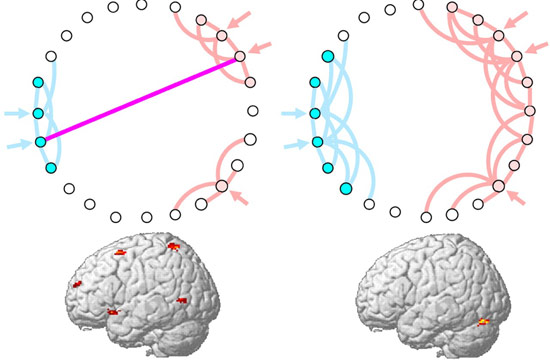 Linking up: Autism is thought to be the result of too many connections in local areas of the frontal cortex and too few between far-reaching regions.

Adolescents who carry certain common variants in a gene associated with autism — whether they have the disorder or not — show abnormal connectivity between brain regions, according to unpublished data presented today at the Society for Neuroscience meeting in Chicago.

The findings bolster the controversial ‘connectivity hypothesis’ of autism, which holds that the disorder stems from too many connections in local areas of the frontal cortex, and under-connectivity between far-reaching regions.

The study, which looks at variants of the contactin-associated protein-like 2 (CNTNAP2, dubbed ‘cat nap’) gene, is one of the first to correlate brain activity and genetic risk factors.

Early last year, Daniel Geschwind‘s lab at the University of California in Los Angeles and two other independent teams each reported that common variants in CNTNAP2 up the risk of developing autism.

The CNTNAP2 protein is involved in cell-to-cell communication and is expressed in frontal-striatal brain circuits, which are important for planning and executive function. But no one knew whether carrying these variants leads to changes in brain activity.

Ashley Scott, a graduate student in Geschwind’s lab, scanned the brains of 16 high-functioning boys with autism and 16 age-, sex- and IQ-matched healthy controls during a difficult memory task that requires activity in that brain circuit. She also collected saliva samples from the children to see which ones carry the CNTNAP2 variants.

Because the variants are common in the population, most participants — 11 of the children with autism and 12 of the controls — have at least one copy.

Scott found that these children have increased connectivity among local areas of the prefrontal cortex. In contrast, long-range connections between the prefrontal cortex and the posterior cingulate cortex — a region toward the back of the brain that’s part of the frontal-striatal loop — are significantly stronger in the children who do not carry the risk allele.

“This suggests that contactin may be acting by biasing the brain towards this pattern of connectivity,” says Scott, now a postdoctoral fellow at the Scripps Research Institute, in La Jolla.

The researchers are trying to replicate these findings in a larger sample of children. If the results hold, they could have implications for treating autism.

“We know that the brain is really plastic,” Scott says. “Maybe this risk gene biases you toward this one pattern, but if you detect it early enough, maybe you can start training, through behavioral or drug therapy, to build up these other connections.”