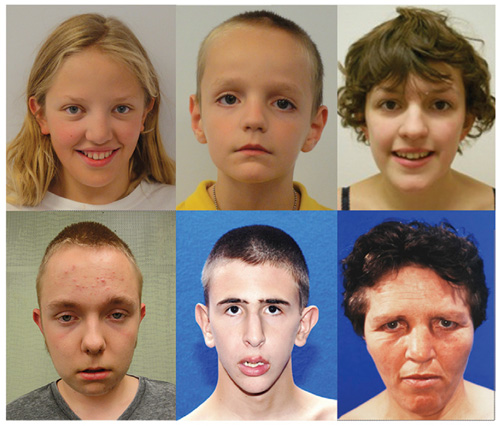 Face forward: Individuals with a CHD8 mutation look strikingly similar to each other, with wide-set eyes and broad foreheads.

CHD8, a gene that regulates the structure of DNA, is the closest thing so far to an ‘autism gene,’ suggests a study published today in Cell1.

People with mutations in this gene all have the same cluster of symptoms, including a large head, constipation and characteristic facial features; nearly all also have autism.

Autism is notoriously heterogeneous, perhaps involving mutations in any of hundreds of genes. Typically, researchers begin by studying people with similar symptoms and working backward to identify what causes those symptoms. But that approach has not been particularly productive.

“We’ve tried for so long to identify subtypes of autism based on behavior alone and we’ve done abysmally at that,” says lead researcher Raphael Bernier, associate professor of psychiatry at the University of Washington in Seattle.

The reverse approach — that is, beginning with people who all have mutations in the same gene and characterizing their symptoms — may prove to be more useful for simplifying autism’s complexity.

For example, identifying subtypes of autism may help researchers develop drugs tailored to that particular cause, says Evan Eichler, professor of genome sciences at the University of Washington, who spearheaded the genetics side of the study. “I think the most important realization is that not all autisms are created equal,” he says.

Researchers first linked CHD8 to autism in 20122, 3. They found mutations in the gene in nine people with autism but none of their unaffected family members. Among those in the autism group, more than twice as many people have de novo, or spontaneous, mutations in CHD8 as have de novo mutations in any other gene.

An independent team led by Joseph Buxbaum at the Icahn School of Medicine at Mount Sinai in New York City has identified another seven CHD8 mutations in individuals with autism. That team has not yet published the data.

With only about two dozen people identified so far, mutations in CHD8 appear to be rare. Still, the gene’s link to autism is clear.

“The significance of the mutation is quite high,” says Edwin Cook, professor of psychiatry at the University of Illinois at Chicago, who was not involved in the study.

To characterize the symptoms of people with a CHD8 mutation, Bernier and his colleagues invited eight such individuals and their families to spend two days at the University of Washington. The researchers combined their observations of these people with detailed clinical reports about another seven individuals who were not able to come to the university.

“These could be cases of autism that were missed,” says Bernier, who was not able to diagnose the participants because they live abroad. Adults, in particular, may have undiagnosed autism because there was less awareness of the disorder when they were children, he says. “My take-home is that if you have this [mutation] there’s going to be a significant problem, and the vast majority of times it’s going to be autism.”

Others are more circumspect about the link.

In terms of their symptoms, too, the participants share a striking resemblance to each other. The first girl in the study with a mutation has unusual facial features and unequivocal autism symptoms such as lack of eye contact — the kind Bernier refers to as “diagnosis in the lobby.” The girl’s parents complained of her severe gastric distress and the fact that she would not sleep for days on end.

A few days later, Bernier met the second child with a mutation. This boy also had clear signs of autism, severe constipation and could not fall asleep. His facial features looked remarkably similar to those of the girl. “He could pass as her sibling,” says Bernier.

As more people with mutations came in, Bernier’s team realized that most of them have wide-set eyes, large ears and broad foreheads and noses. Of the 15, 12 have enlarged heads, 12 have gastrointestinal problems (9 specifically have constipation) and 10 have sleep problems.

Many single-gene brain disorders related to autism are characterized by intellectual disability, but nearly half of the individuals with CHD8 mutations have intelligence quotients in the normal range.

“The subgroup has a remarkably clear phenotype,” says Thomas Frazier, director of the Center for Autism at Cleveland Clinic Children’s, who was not involved in the study. Clinicians might be able to identify people with this subtype of autism by these features, he says.

To study the mutations further, the researchers blocked expression of the gene in zebrafish embryos. The fish end up with large eyes and take hours longer than controls do to move a fluorescent pellet along their digestive tract. The mutant fish also have about half the number of neurons coating their gut as controls do.

These observations are in line with the high prevalence of digestive issues among people with a CHD8 mutation. “It tells me right away that this is not one quirky thing that happened in 15 people,” Frazier says. “This is a real biological phenomenon and we should pay attention to it.”

The researchers are looking for more people who have CHD8 mutations. Eichler and his team have access to sequences from nearly 15,000 people worldwide who have autism or other developmental disabilities. They have clinical information from these people and permission to contact them and their families — a rare advantage in large-scale genetics studies.

“The devil is in the details and that’s where we need to be — in the trenches and really working with the families,” Eichler says.