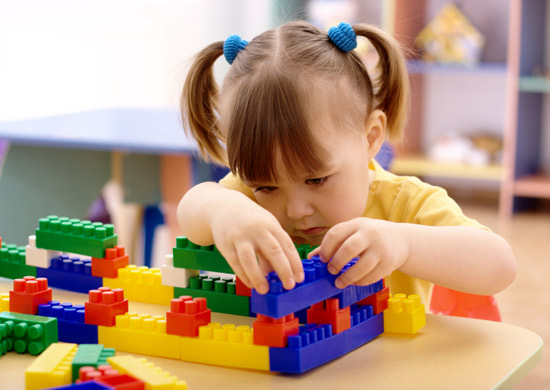 Building blocks: Children with autism tend to build Lego structures with repetitive shapes or colors, but can be taught to try different combinations.

Positive reinforcement can help children with autism break out of repetitive patterns of play, according to a study published in the Journal of Applied Behavior Analysis. Results from the small study broadly suggest that behavioral intervention can improve creativity in these children.

Researchers scored how often six children with autism, ages 6 to 10, created the same structures or patterns of color with 24 blocks of Lego in four different colors. Each child showed a preference for a specific combination of colors or shapes.

Two of the children varied their Lego structures more often when the researchers rewarded them with a favorite food or toy.

The others varied their construction more when researchers made different structures and then suggested the children do the same.

After weekly sessions conducted over several months, the researchers switched the toys to wooden blocks that look like plastic Legos. Only one of the children maintained their improvements when playing with the new blocks, suggesting that the children needed more training to generalize their experience. The others were able to vary their play with the wooden blocks when they were given positive reinforcement in the form of praise, the researchers reported this summer.

After up to three months with no sessions, four of the children continued to build more diverse Lego structures, suggesting that the therapy could have long-term benefit.