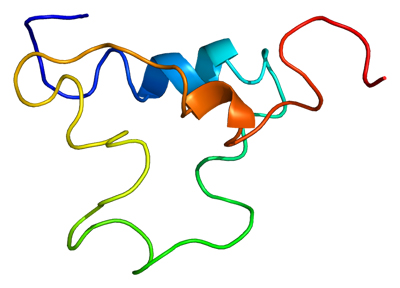 Growth factor: IGF-1, which is marketed as a growth hormone, may also treat certain forms of autism.

Insulin-like growth factor 1 (IGF-1), a drug approved for use in children with short stature, reverses neurological deficits in mice with an autism-linked mutation in the SHANK3 gene, according to a study published 27 April in Molecular Autism1.

Mutations in SHANK3 are present in as much as one percent of people with autism. The gene is deleted in Phelan-McDermid syndrome, a disorder characterized by intellectual disability, seizures and, often, autism.

The results provide support for a small ongoing clinical trial testing the effect of IGF-1 on autism symptoms in children with Phelan-McDermid syndrome and autism.

The researchers presented preliminary results from this study at the 2011 International Congress of Human Genetics in Montreal, Canada.

SHANK3 encodes a protein that stabilizes connections at neuronal junctions, or synapses. There are as many as five different mutant SHANK3 strains, each lacking a different region of the gene. Each of these strains is characterized by distinct but overlapping symptoms.

The new study focuses on a strain that lacks one copy of SHANK3. These mice show impaired signaling at synapses, but only modest changes in behavior, including mild social deficits and problems with motor skills.

After 13- to 15-day-old mice are injected with IGF-1 daily for two weeks, the mice regain the ability to modify their synapses in response to experience. This process, called long-term potentiation, underlies learning and memory. The mice also recover a type of signaling that activates neurons, which relies on a family of receptors called AMPA.

One of the limitations of the study is that this mouse model has few behavioral deficits in the first place, the researchers say. However, the treated mice do regain the ability to balance on a rotating rod, which may indicate an improvement in the motor deficits seen in autism.